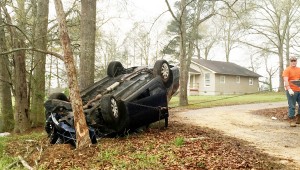 Messenger photo/stacy graning
Two Troy women were injured in an early-morning wreck Thursday. Kimberly Freeswick, 49, of Troy, and her 16-year-old daughter were traveling west on County Road 3311 when the accident occurred. Both the driver and her daughter were transferred to Troy Regional Medical Center with non life-threating injuries. 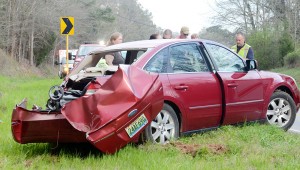 Messenger photo/Ngoc Vo
A four-vehicle accident occurred on Hwy 29 S near County Road 1163 yesterday afternoon around 4:30. Initial entrapment was reported, however, there was no serious injury, according to authorities. The accident appeared to have been a chain reaction resulting from a collision between a black truck and a red Ford Five Hundred.