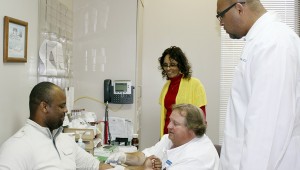 Messenger Photo/Jaine Treadwell
Dr. Michael Bivins, right, and is mom, Constance Bivins observe as his brother has his PSA checked.

Although Bivins has not reached the age when all men are advised to have annual prostate cancer screenings, he is checked every year.

Bivins, urologist and surgeon with the Urology Centers of Alabama in Birmingham, will return to his home county Saturday to participate in the free prostate screenings offered from 10 a.m. until 2 p.m. at the Pike County Health Center in Troy. No appointment is necessary.

“Early detection of prostate cancer saves lives,” Bivins said. “At Urology Centers of Alabama, we offer free prostate cancer screenings in an effort to find those patients so they can be treated and cured.”

“Family history means father, brother or grandfather,” he said. “These screenings are highly recommended for all African American men because prostate cancer incidence and death rates are higher than in Caucasian men.”

Bivins said, scientists don’t know why the rates are higher in African Americans, but it is widely believed that a combination of genetic differences, lifestyle, nutritional habits and medical care could all play a role.

“The rates are even higher among African American men than African men,” he said. “That is an indication that environment plays a big role in the incidence of prostate cancer. Japan and China have the lowest risk rate in the world. However, when men from those countries migrate to America, the incidence of prostate cancer goes up three times. That is an indication that Western diets play a role.”

As an African American, Bivins is among those in the high rate of risk so he makes annual prostate cancer screenings a part of his annual health care routine.

“By taking one minute out of your life for a prostate cancer screening, you could be saving your life” he said. “Your life is certainly worth one minute of your time.”

As a urologist and surgeon, Bivins is witness almost every day to the importance of one minute in a man’s life.

He chose robotic surgery for a reason.

“To be successful you must be ahead of the inevitable,” Bivins said. “The way things are in medicine today are not the way they will be tomorrow. Watching for what was next on the horizon, I saw the advantages of robotic surgery. Using robotics, a surgeon is able to see in 3D, and the surgery is more finite.”

Using robotics, the surgeon has a greater field of vision, and the robotic surgical arms allow the surgeon to make highly precise movements inside the incision.

“There are also advantages for the patient,” he said. “The surgery is minimally invasive; there is less bleeding; and the recovery period is quicker.”

Bivins said when prostate cancer is detected early, the cancer can often be treated and managed and surgery avoided.

He encourages all men of the recommended ages to take advantage of the free prostate cancer screenings from 10 a.m. until 2 p.m. Saturday at the Pike County Health Department at 900 South Franklin Drive in Troy. Appointments are not necessary.