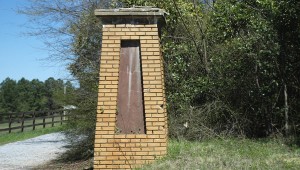 Messenger Photo/Jaine Treadwell
In the 1920s an archway on Trojan Terrace welcomed visitors to Troy. The only remains are the two columns that supported the archway.

The yellow brick columns stand like lonely sentries watching over what used to be.

The columns once supported the wrought-iron archway into Trojan Terrace, the main thoroughfare into Troy’s north side during the early part of the 20th century.

The lettering on the archway, “WELCOME TO TROY,” was a greeting to motorists and also a source of pride among Troy residents. Not many towns welcomed its citizens home or greeted its visitors in such grand style.

Just when the archway was erected or when it was taken down, no one seems to know. The archway was up in the 1920s and still around in the early 1940s. That is just about all that is known of the ups and downs of it.

Karen Bullard, Troy Public Library historian, said her 10-year search for a postcard with a photograph of the archway has come up void. She would greatly appreciate knowing of any existing photographs of the historic arches.

Former Troy mayor Jimmy Lunsford, laughingly, said he remembers when the welcome sign went up that read, “Welcome to Troy, home of 10,000 friendly people and two or three old grouches.” What happened to that sign, Lunsford said he doesn’t know either.

“But I do know that Trojan Terrace was a busy place before the bypass came along,” he said. “I remember, at one time, there was a motel and a restaurant that was real popular. R.O. ‘Onzie’ Griggs had a mechanic shop out there. He was a down to earth, well thought of older gentleman. And, the Smith brothers, Moon and Coot, had an auto repair shop that everybody used. And there was a dance hall on the Terrace. Up on Legion Hill was the American Legion building and I heard they did a little dancing in there, too.”

Frances Davis said her grandparents owned a motel and restaurant on Trojan Terrace in the 1920s.

“The motel was actually small cottages and the restaurant was a really big one,” Davis said. “Quite a few people lived on Trojan Terrace during the 1940s, so with the shops, it was a welcoming entry into Troy.”

Davis said, as a child between the ages of six and 10, she remembers the arches but has no knowledge of photographs of the archway.

One story about the activities on Trojan Terrace involved soldiers from Fort Rucker and the chief of police.

The story source said soldiers would come to Troy on passes and make a beeline to an upscale juke joint on “the Terrace.” The soldiers would have a bit too much to drink and get rather rowdy. Rather than take them to jail, the police chief would load them in the squad car and take them to the county line where he was met with law enforcement from Dale County who would get the drunk soldiers back to the army base.”

Trojan Terrace is no longer the main way into Troy so it’s not a high traffic area. But, the columns that supported the archway into Troy are still standing, as if watching and waiting the return to their glory days.