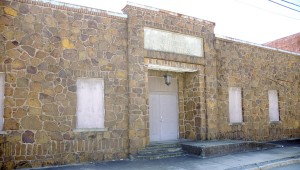 The Rock Building may be seeing some restorations brought on by a community effort. Probate Judge Wes Allen has made plans to restore the building and is proposing a joint venture between the Pike County Commission and his office in order to fund the restoration.

Probate Judge Wes Allen has a plan to restore the Rock Building, and he’s asking the Pike County Commission to join the effort.

Allen is proposing a joint venture between the commission and his office to fund the restoration of the building, which has been estimated at more than $520,000. He said his office would contribute $200,000 toward the renovation process.

“This is a building worth restoring,” Allen said on Tuesday. “It was a community-endeavor when it was building and it represents the spirit of Pike County.”

The building, located at the corner of Church and Market streets was built in the late 1930s as a WPA project. It formerly housed county offices and a public auditorium. A fire destroyed the building in the mid-1990s and it has not been used since then. In the past year, local residents have spearheaded an effort to restore the building.

“I’ve been thinking about how we could all work together to accomplish this goal,” Allen said. “This could benefit taxpayers, streamline government and preserve a piece of Pike County history.”

Allen said he is proposing the county commission borrow the funds necessary to restore the building.

“I’ve already talked with the presidents at both Troy Bank and Trust and First National Bank, and the county could secure a low-interest 10-year loan,” Allen said. “The cost of the loan, including interest, would be about $634,095 and annual payments would be about $63,000.”

Allen said his office could pledge $20,000 per year to the project, using funds collected from fees. Those fees were established in 2003 as a way to fund the preservation and archiving of county records, from newspapers to marriage licenses to miscellaneous records and data. Allen said the fees generate more than $100,000 per year, which has been used to digitize court records, preserve records, upgrade equipment and facilities for storage.

“I’ve already talked with an auditor, and as long as there is a dedicated space in the new building for the storage and protection of records, we can use this money for the renovation,” he said.

County commissioners questioned the use of the fees raised through the probate office during budgeting sessions in fall 2014. The office’s reserve fund is more than $400,000 and commissioners said at the time they wanted to be able to use those funds to offset shortfalls in the county budget. However, the legislation that created the fees specifies they must be used for the preservation of records and gives the probate judge responsibility for spending the funds.

Moreover, Allen has suggested that county commissioners explore opportunities to consolidate county offices in the renovated Rock Building. “Right now, we have EMA in one office; extension service in another; and juvenile services in another building,” he said. “We may have the opportunity consolidate those offices … which benefits taxpayers.”

Tuesday, Members of Pike County Commissioners were in Montgomery attending the Legislative session and said they could not comment on Allen’s proposal until reviewing it further.

David Helms, who is spearheading the grassroots’ group efforts to restore the Rock Building, said he is elated with the probate judge’s generous effort.

“This is an awesome thing for Judge Allen to do,” Helms said. “The Rock Building was constructed through the efforts of the people of Pike County. We all know the story behind the Rock Building. So many people contributed to the building of it, and it should be with that same spirit of unity that we restore it.”

Helms said he appreciates Allen’s stepping forward and finding a way to help the cause.

“Last summer, we celebrated the 75th anniversary of the dedication of the Rock Building, and there was a lot of excitement surrounding the event and enthusiasm about the restoration project,” Helms said. “But, recently, we’ve hit a standstill in our fundraising efforts.

“Judge Allen’s commitment to the restoration project is just the sparkplug we needed to rekindle the community spirit that we need to move forward. He has come forward with a very generous proposal. Now, it’s time for the rest of us to do our part.”

Helms said the Pike County Commission has dedicated $50,000 to the restoration of the Rock Building in this year’s budget and 800 people have donated $18,000 to the project.

“That’s $68,000 toward the cost of the demolition of the interior of the building and stabilizing the walls so a roof can be put on,” Helms said. “That work will stop the bleeding so that we can move forward toward the final completion of the restoration project.”

Helms said he looks forward to the day when the Rock Building is once again a building “for the people.”

“I applauded the efforts of Judge Allen to help us move forward with the project,” he said. “His support comes as a big form of encouragement when we really need it. But, it’s going to take a community effort, and that’s exactly the way it should be.”

Helms said he believes teamwork and community spirit will once again be rock solid and the Rock Building will again be a place of pride for all citizens of Pike County if commissioners were to follow through with their portion of the proposal.