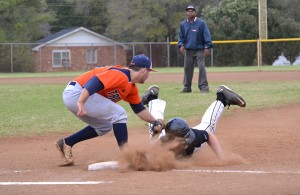 Messenger Photo/Jennifer Wilson
Jason Fleming applies a tag to a Greenville base runner.

With the win, the No. 1 Trojans (18-1) clinched a playoff spot for the 17th consecutive season.

“The wins were good to see,” Charles Henderson head coach Derek Irons said. “The team had a little bit better focus tonight we had two really good outings from Austin Ingram in the first game and Hunter Reeves in the second game. We had no walks or hit batters. That set the tone for the games and we played off of that.”

In the first game, Charles Henderson got off to a slow start offensively, scoring just one run in the first three innings of the game.

But the Trojans’ defense was stifling, holding the Tigers to zero runs on 10 hits in the first and second games combined.

In the final three innings of the first game, Charles Henderson awoke to score 12 runs on the way to the 13-0 win.

In the game, Nick Lewis and Chase Smartt had three hits each. Lewis also had one of the Trojans’ four doubles in the game.

On the mound, Austin Ingram earned the win, allowing five hits and no earned runs in six innings pitched.

In the nightcap, Charles Henderson picked up where it left off in the first game, scoring four runs in the first two innings to take a comfortable 4-0 lead.

In the fourth inning, Ingram and Smartt hit back-to-back homeruns in what was a seven-run inning for the Trojans.

Hunter Reeves secured the win on the mound for Charles Henderson, giving up five hits and no earned runs in four innings of work.

Irons said he was pleased with the way his team responded offensively after only managing four hits in their loss Tuesday night to Trinity.

“We did a better job of getting pitches to hit and taking advantage of those,” Irons said. “Especially those two guys Austin and Chase in the lineup in the fourth inning, that gave us a big inning.”