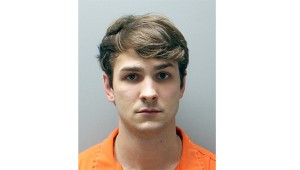 The son of Alabama Supreme Court Chief Justice Roy Moore was arrested in Troy on Sunday on charges of drug possession.

“He was arrested yesterday at approximately 3 p.m. for possession marijuana second degree and possession of a controlled substance, which were later identified as Xanax pills,” said Lt. Bryan Weed of the Troy Police Department.

Weed said officers had been responding to a burglary in process call concerning a white male trying to break into a residence in the 1200 block of Allen Street when they saw a group of individuals standing by a vehicle and observed the smell of marijuana.

“Officers observed a smell of marijuana coming from the vehicle that Moore had been occupying with four other individuals,” Weed said. “On a search of the vehicle they recovered (the marijuana and pills). And, after subsequent investigation Moore was placed under arrest and warrants were obtained for those charges.”

Scott Hoyem, a spokesman for the Alabama Administrative Office of the Courts, confirmed the arrest Monday but said Chief Justice Moore would not comment on it, calling it a personal matter.

Pike County railroads get a makeover