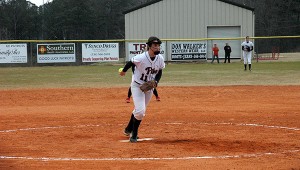 The Lady Patriots on Thursday split a double-header with No. 1 ranked Macon East, beating the Knights 4-0 in the first game. The Patriots fell 5-2 in the second, but head coach Allie Park isn’t deterred.

“They’re doing awesome,” Park said. “They’re really playing as a team. I’m just so excited ever time the play because they do so well.”

The Lady Patriots were scheduled to play their first round in the 10th Annual Jonah McWaters Tournamenet on Friday, but all softball and baseball games were cancelled due to the weather. The Lady Pats will face Northside Rams at 12:30 p.m. today.

“As it gets closer and closer to the state tournament I think we’re really ready and we’re playing well together and that’s really all a coach can ask for,” Park said.

Park said the team’s strengths didn’t just lie in offense or defense, but instead was an up and down the line effort.

“Offensively I’ve got some girls who are really hitting the ball well,” Park said. “Scoring wins games and having runs and scores really is a key to winning a ball game, but we have a really solid defense as well. Macon East is a really strong hitting team. We were just able to make plays defensively, and I think the combination of us hitting well and keeping teams from scoring runs has been a positive things for us.”

And, though the team is young, Park said some of the team’s stars were the younger girls, including Bailey Rushing, a ninth-grader who threw a no-hitter against Macon East in theshutout Thursday evening.

“Bailey is in ninth grade and she pitched a no hitter, which is awesome,” Park said. “She and Amberlyn (Baker) play really well together. They know each other. AB knows what to call and Bailey can shake AB off and knows what pitch to call. I think having a pitcher and catcher that work well together has really helped the team as well.”

Baker and Rushing are not the only girls on the team who are shining, though.

“Kayla Benton, she’s our shortstop, and every time she gets on base I know she’s going to score,” Park said. “Sam Yarborough pitches and can switch between pitcher and third base. Mya Terry in the outfield, she’s only a ninth-grader, but she’s good and she can hit the ball as well. Daniel Brown, she plays first and she’s hit several home runs for us this year.”

Having toppled the No. 1 AISA team, the Patriots are currently ranked No. 2, but Park said she wasn’t surprised at how well the team had been doing this season.

“I feel like I should be more excited than I am, but I expected it,” Park said. “I knew they were going to be really strong this year. I think they’re all just thrilled to death to have beat Macon East. I don’t think we’ve beaten them in several years. I think that was just a big confidence booster for us.”

Park said with the win brings the team’s record to 17-6 on the season and gives the girls the confidence to play at a higher level and a winning-mentality that will carry them through the tournament this weekend.

“I think they’re realizing they are good and they can beat anybody if they put their mindd to it,” Park said. “I think for them it’s really going to be a mental game against Northside. It’s going to be more of an offensive game. Hits are going to really carry us for this game. I think defensively, Northside is a really good team.”

Along with the softball portion of the Jonah McWaters tournament, many of the baseball games from Friday have been pushed to today after being rained out.