‘It won’t happen to me’: It happened to my son: a mother’s story 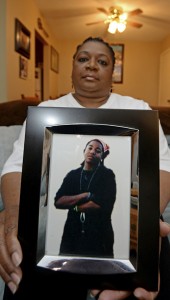 Kelly McCorvey Tellis, a sophomore at Charles Henderson High School, was killed in an automobile accident in Banks on Nov. 6, 2005. His mom, Irene Mahone of Troy, is a dedicated supporter of the “It Won’t Happen to Me” teen victim impact program.

She left her bed to go to son’s room, anxious to hear about the fun of homecoming at Troy University. But Kelly was not in bed. The covers had not even been turned back.

She went into the kitchen expecting to find him plundering the cabinets for a midnight snack. But he was not there.

Mahone had an uneasy feeling. She didn’t usually allow her son to be out until midnight but it was homecoming and that was special. And, too, he was 16 years old and no longer a little boy, but yet, still her baby boy.

“Kelly had gone to the game at Troy University with friends,” Mahone said.  “He called around 8 o’clock to ask if he could stay out until midnight. I thought it would be all right for him – it was a special night. I told Kelly I loved him, and he said he loved me.” Mahone could hear her son’s words, “ l love you,” as she nervously called his friend, the friend who was driving the car.

“Gone where? Where?” was all Mahone could think to say. “Put my baby on the phone.”

Then came the words that she could not bear to hear.

A state trooper took the phone and told Mahone there had been an accident in Banks, near the Buy-Rite.

“I got in my car, calling on Jesus,” Mahone said. “When I got to Banks, I could see Kelly, covered with a white sheet. I knew it was him. I saw his shoes that I had just bought for him. I tried to run to him but the life leaped out of me.”

Mahone fainted at the scene of the accident and was taken to the hospital where she was treated and released.

Five teenagers were in the vehicle that night. Kelly and a friend, who were in the back seat, lost their lives. Neither was wearing a seatbelt.

The driver, age 17, was among the survivors.

He admitted that he was racing when the accident occurred and was charged with two counts of manslaughter and three counts of aggravated assault.

“No amount of money could bring our babies back,” Mahone said. “We agreed to a plea and my son’s friend served 18 months and five years probation. That was all. But he could spend his whole life in jail, and what good would that do anybody?”

Mahone said it is her hope that one day the young man who was driving the vehicle the night her son was killed will come forth and tell the story of the impact that night has had on his life.

Mahone said nothing could fill the void of a lost child. But she wanted to dedicate her life to helping make sure that other mothers never had to know the pain of losing a child. But what and how?

Then one day, Mahone happened to see a poster in Byrd Drugs in Troy promoting “It Won’t Happen to Me,” a teen victim impact program, at Cattleman Park.

Meeting Bill and Diane Richardson, who founded the program, at the teen safe driving event organized by Jennifer C. Garrett and friends, gave Mahone a new purpose in life.

“I realized that maybe there was something I could say or do that might make teenagers, at least, think about the decisions they make when they are driving or even are passengers in a vehicle,” she said. “Teenagers think that nothing can happen to them. They think accidents happen to someone else.

“I don’t think Kelly thought that anything like that would happen to him. But it does happen. Every day something ‘like that’ happens. That was what Bill and Diane were hoping to make the teenagers at Cattleman Park realize, that things happen –that teenagers die in automobile accidents because they don’t think and act responsibly.”

Mahone is now a foot solider in the Richardson’s non-profit safe driving program.

Each fall, “It Won’t Happen to Me” sponsors a three-mile Memory Walk in Lawrenceville, Ga. Families that have lost teenagers in vehicle accidents come from all over the country to participate. Mahone is a participant.

“When we were walking back in the fall, I watched when balloons, representing the lost young lives, were released. The balloons went straight up into the clouds as if witnesses to the losses of young lives. I felt such a cool, peaceful and reassuring breeze.

“As we walked, statistics were posted that reminded us how many young people lose their lives each year in vehicle accidents – accidents that could have been avoided. Texting, talking on cell phones, changing stations on the radio or putting in CDs or taking them out. Inattention to driving causes accidents and claims lives.”

Each teenager who is remembered on the walk has his or her picture displayed, and a rose is given to be placed next to each picture.

“It’s a beautiful way to remember, but it breaks your heart,” Mahone said. “Standing there, I could hear Kelly’s last words, ‘I love you, Mama” and I say ‘I love you, too, Baby.”