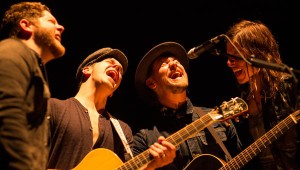 The American Christian/rock band Needtobreathe is coming to Troy University on \ April 17 and ticket sales are brisk.

The Troy University Spring Concert will also feature Ben Rector, an American musician based in Nashville.

The concert will begin at 7 p.m. at the Troy University Trojan Arena. Doors will open at 6 p.m.

Derrick Brewster, Troy University assistant dean of student services, said Needtobreathe is from Seneca, S.C., and features “Bear” Rinehart as lead vocalist and on the guitar and piano. Bo Rinehart is on guitar, Seth Bolt on bass and Josh Lovelace on keys.

“In 2001, the band independently released an 11-song album. They followed in 2004, with two four-song EPs that brought them to the attention of Lava Records, which signed the band to a contract,” he said.

In 2006, Needtobreathe was featured on the cover of CCM Magazine, an unprecedented new artist endorsement by the national publication.

The band was nominated for two Dove Awards in 2008. In 2009, Needtobreathe’s “Washed by the Water,” won the Dove Award for “Rock/Contemporary Song of the Year.”

“Rivers in the Wasteland” was released on April 15, 2014 and debuted No. 1 on both the Christian Albums and Rock Album charts and No. 3 on Billboard 200. The album was originally set to be titled “Wasteland” taken from Isaiah 43:19 –Behold, I will do a new thing, now it shall spring forth, shall ye not know it? I will even make a way in the

wilderness and rivers in the desert.

“Ben Rector is an American musician based in Nashville,” Brewster said. “He is a native of Arkansas and a graduate of the University of Arkansas. While at Arkansas, he released a self-titled EP. ‘Conversation,’ a song on the EP, won the grand prize in the pop category of the John Lennon Songwriting Contest in 2006. Ben Rector is the youngest person to ever win the award for the pop category.”