LOW SCORE: City of Troy will be able to boast its lowest ISO rating in city’s history starting June 1 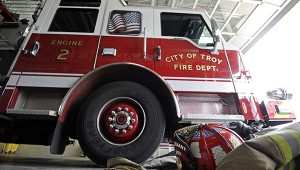 Come June 1, the City of Troy will be able to boast the lowest ISO score in the city’s history.

While the city’s previous rating was a 4, Troy Mayor Jason Reeves reported the city had been given a 3 during its most recent evaluations.

“We now have a 3 ISO rating which is the lowest rating in city history,” Reeves said. “I would like to thank the council for providing resources to get to that point. I would also like to thank Chief Outlaw, Chief Ennis and Chris Dozier for all their hard work.”

ISO is an advisory organization that partners with municipal fire departments, city managers and other community officials to evaluate local fire-protection resources. ISO ratings are based upon three different scores combined and scores range from 1 to 10 with 1 being preferred, Outlaw said.

“The communications center counts 10 percent of the rating, the fire department counts 50 percent and the water supply 40 percent,” Outlaw said.

In rating the water supply, ISO officials consider the number of hydrants, amount of water pressure each has, and the amount of storage tanks.

But, the rating for a fire department does not come from that.

“They look at our response times, they go back and evaluate the fires that we’ve had in the last year and they look at the response time, the number of people that you have on scene,” Outlaw said.

“One of the big things that have helped us tremendously is the inspection and the pre-fire training,” Outlaw said. “And, the every day training that we do. We have to keep a record of it and that’s submitted for our ISO rating. We also do the checking of the hydrants every year and check flows on a certain amount of hydrants every year.”

Outlaw said usually evaluations are done every 10 years, but the regulations had changed pushing evaluation dates up.

“They’ve been doing it every 10 years, but now it’s going to be approximately every five years that they come in and look,” Outlaw said.

Outlaw said not only the department’s extensive training had helped the city’s rating go down but being able to purchase two new trucks also played a role in lowering the rating.

“The council approved buying two new trucks, which we increased the pumping capacity with those trucks from the old ones,” Outlaw said. “The inspections and the pre-fire planning that we’ve done has helped, but all up and down the categories, we have worked on trying to increase points spread that we got for the last time.”

“We’ve made great strides,” said John Witherington, council president and owner of The Witherington Insurance Group. “I know there are those who wonder ‘how much it will affect my insurance rates?’ and it depends on the construction of the building. But, generally speaking, that percentage should change for the better.”

Outlaw said the lower ISO rating would also help recruit business for the area, and Reeves said the city was remarkably close to an even better rating.

“We expect and hope to improve,” Reeves said. “We are remarkably close to a 2. We are going to keep pushing and getting better. I want to thank everyone on his or her hard work. The lower rating should have an impact on homeowners rates.”

To continue improving, Outlaw said the fire department would continue to fine tune the things they were already doing in hopes to lower the city’s rating.

“We’ll just add on what we’ve been doing as far as doing the inspections and pre-fire planning, and the new rating scale is one place you can pick up bonus points,” Outlaw said. Previously, “the inspections and pre-fire planning and all didn’t count that much in the ratings, so they have made that above and beyond the 100-point class and it can actually go up 5 ½ points on that. We’ll just add to what we’ve been doing and it’s been talked about adding a new station somewhere down the road. Anything that we do from this point forward will help us.”

In 2014, approximately 2,410 cities were rated as a 3, and only 750 were rated a 2. Outlaw said the department would continue to do its best to lower the rating.

“I feel good for the home owners because it reflects on their homeowner’s insurance, but it’s been a joint effort between the mayor, the council and the communications where we’ve updated the CAD,” Outlaw said. “The water department, they’ve increased some of the main sizes here in town, and that has helped. We are really thrilled.”