Henderson back with plans for Troy 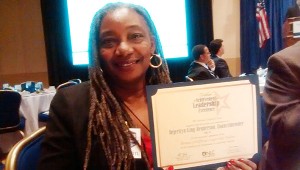 “One of the main thing I take away from this year’s conference is the nationwide initiative to eliminate veteran homelessness,” Henderson said. “I am going to my next community meeting in April with the intention to disseminate the information (about the initiative).”

Henderson said she would also contact church-based community outreaches to make them aware of the issue.

“We do have homeless veterans in the City of Troy, and we have several living in my district,” she said. “This is a problem the city should tackle.”

Dunn and Henderson personally identify with the issues surrounding quality of life for veterans.

“Having served in two wars, I walked in the same shoes as (other veterans) and know they don’t have a place to stay,” Dunn said. “We need to take care of the veterans after all that they went through. We owe them that much.”

Henderson said the initiative was “very much close to her heart.”

“These are the people who went to war to make sure we as elected officials are able to do what we do, providing good services to our community,” she said.

According to Henderson, assistance to veterans could be by means of clothing, food supplements and housing.

“We should have a public home program for veterans through housing authorities,” she said. “Some of the housing options mentioned in the conference were apartments from rental agencies or homes available for rent from churches.”

Dunn said in addition to the homeless veteran initiative, he also discussed the issue of transportation for school children at the conference.

Henderson was a member of the Human Development Steering Committee, which is making efforts to push for the reauthorization of the Elementary and Secondary Education Act.

“The EAS act is up for renewal and we are trying to get Congress not only to pass the act but also to reinvent it,” Henderson said.

“The purpose of this is so that every child can participate in early childhood education such as Headstart and pre-K programs for children from 3 to 5 years old. It would reach those under privileged kids whose family could not afford to pay for the educational services.”

Henderson said the proposed changes in the act would create lasting impacts.

“Unfortunately we have parents now who do not appreciate the value of education,” she said. “If we start (early education ) with the children young enough, we can instill in them an educational value system that they will pass on to their children. They would be able to pursue good education to be someone, do something in their lives.”