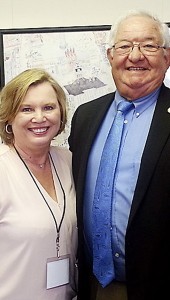 Vicki Pritchett, Johnson Center for the Arts executive director, and Wiley White, the center’s development director, joined more than 100 arts advocates from across the state this week at the Alabama Arts Advocacy Day in Montgomery.

Donna Russell, executive director, Alabama Alliance for Arts Education, said the purpose of Arts Advocacy Day was to bring arts advocates from across the state together so, as stockholders of the arts in Alabama, they could speak with one voice.

“The program featured speakers who shared how the arts have affected their lives and their careers and how the creative industry affects the state’s economy,” Russell said.

Arts Advocacy Day was an opportunity to explore ways and means for arts advocates to communicate the importance of the arts to leaders within their communities and across the state.

“As arts advocates from around the state, we gathered to learn how to express our passion for the arts constructively through educational training and other avenues,” Pritchett said. “Arts are an integral part of life. Making and supporting public policy in the arts boosts economic development, increases student achievement and enhances our communities.”

Pritchett said the arts play an important role in all communities and Pike County is no exception.

“People may not realize that we have 23 arts-related business in Pike County that employ 35 people,” she said. “That’s not a huge percentage of the people employed but it is significant and that number is growing. Nationally, 702,771 businesses are involved in the creation or distribution of the arts and they employ 2.9 million people. Percentage wise, that also might not seem like a lot but 2.9 million is a lot of jobs.”

The keynote speaker for the Arts Advocacy Day was Jeff Poulin, arts education program coordinator, Americans for the Arts based in Washington D.C.

“He encouraged all of the arts organizations to be active advocates for the arts in Alabama,” Pritchett said. “Arts funding has been on the decline on the national level as well as the state level and we must lead the charge in letting people know the importance of the arts in education and in our daily lives.”

Pritchett and White took the opportunity to be shuttled to the Alabama State House to visit with the State Legislators.

“We met with Pike County’s state representatives, Rep. Alan Boothe and Sen. Jimmy Holley, and Sen. Gerald Dial, who is a member of the Troy University Board of Trustees and comes to Troy often,” Pritchett said. “We made an appeal to them, as they are making the new budget, not to make cuts to the arts.

“We sat in the balcony as the House of Representatives opened the new session. This legislative session is most critical to the arts because the governor’s proposed budget removes all arts funding from the Education Trust Fund and places it in the General Fund. The General Fund is running a deficit and is in a budge crisis, which could prove detrimental to arts funding.”

Pritchett said the goal of Alabama’s arts advocates is to show Alabama’s policy makers that the arts matter to the citizens of the state, and to elicit active support for arts funding across the state.