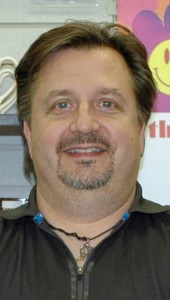 But he does have innovative ideas and the know-how make them reality.

Lieb, owner of Eeztec Solutions in Brundidge was the program guest at the Brundidge Rotary Club’s Wednesday meeting.

Lieb said he has many interests and even more ideas.

“And I have many things in mind,” he said, with a smile. “I like to engineer things and make them reality.

Lieb has partnered in the purchase of several other buildings in the downtown area and “more exciting things are coming.”

The “artistic feeling” of the town with a population of 2,064 was what attracted Lieb’s interest.

“I just got a vibe when I came to Brundidge,” Lieb said. “It has an artistic feeling about it and that’s just something I can’t explain. For my ideas and what I would like to do, Brundidge is the perfect fit.”

A recording studio in downtown Brundidge is not what one would expect to find and that just might be the beauty of it, Lieb said.

He invited the Rotarians on a personally guided tour of 3FROGZ and the eagerly accepted.

“Wow!” That was the initial response of the Rotarians, who “just can’t believe this is Brundidge.”

One Rotarian remarked that Brundidge might be the new Muscle Shoals.

“I don’t know much about recording studios but I’m impressed,” said Dixie Shehane, president of the Brundidge Business Association.

“What Olaf is doing is bringing a renewed enthusiasm to the business community, to the whole community. This is an exciting time in Brundidge. We have a lot going on and it’s all positive.”

Brundidge Mayor Jimmy Ramage said, too, that good things are happening in Brundidge.

“Small towns like Brundidge that are located near box stores and county seats have to find their niche if they are going to continue to grow and prosper,” he said.

“We’re fortunate to have food manufacturing businesses to grow on. To think we might find our niche in the arts and entertainment is very exciting. I’m looking forward to good things ahead.”