Huner not afraid to fly 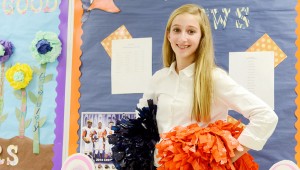 Hannah Huner shows off her pom poms to show her excitement to be returning to the CHMS cheerleading squad.

A couple of weeks ago, Hannah Huner was sitting serving as “mayor for a day” in Troy.

Huner was one of the seven seventh-grade students chosen to participate in the 15th Mayor for a Day program. In order to be selected, Huner had to submit an essay as well as a video presentation.

She had the opportunity to see how government worked and to sit in a mock-council meeting. The group of student presented a resolution to the City Council, which was passed unanimously.

“I will remember that day forever,” Huner said. “I got to do what the mayor and city council members do. I learned what huge responsibility it was to be a mayor.”

Huner said drafting and presenting the resolution to the council helped her prepare for the Model United Nations Assembly last week.

Huner’s team represented Egypt in the event, discussing the issue of energy shortage in the nation.

“You have to have a lot of courage to talk to so many people,” Huner said. “You have to do a lot of research to be prepared for whatever (the audience) may ask you.”

This week, she’s looking forward to a new challenge as she was just selected for the Charles Henderson Middle School cheerleading squad as one of two returning members.

“Last year I was very lucky,” she said. “All of us got along and I had already knew them. We had very close relationships with one another.”

Huner said the connections she developed with her team members were important to her performance. She also gained skills other than cheerleading from her experience being on the squad.

“It helped you work better with other people and be supportive to one another,” she said. “We encourage each other, like ‘you can hit that stunt.’”

According to Huner, she put a lot of trust in her team members.

“I am a flyer,” she said. “My grandparents thought it was scary, but I have very good bases. I have such good relationships with them I know they are going to catch me.”

Although Huner just completed her first year on the squad, she has been dancing and involved in similar activities for a long time.

“I am still involved with SheBang but just for performances,” she said. “I like to dance and cheer. I was three (when I started) and I fell in love with it.”

Huner said she did not feel that being in the cheerleading squad involved a lot of sacrifices. However, being on the team is demanding.

“There are a lot of requirements,” she said. “You have to give up your summer to prepare for camp. Many times I come home around 10 at night, just getting back from basketball games.

“A lot of things I do, I have to work around our (cheerleading) schedule. But I know I have to be there first.”

During the school year, the CHMS cheer squad practices from 3:15 p.m. to 5 p.m. Monday through Thursday. The members also get together four days a week for three hours each day during the summer in preparation for the Universal Cheerleaders Association camp at Troy University in July.

Huner also practices clogging once a week. She is a member of Junior Beta Club and the Junior Honor Society at CHMS.

She said her involvement did not interfere with her schoolwork.

“I would do my homework on the bus or during my TAG (Talented and Gifted) period,” she said. “We know the cheering schedule a head of time, so I can make arrangements to study for a test.”

“Sometimes I didn’t want to get up (for practice),” Huner said. “But what we achieved was a big accomplishment. We did very well, and I feel we represented the school well.”

Huner said she hopes to keep cheering when she comes to high school. She plans to be a pharmacist or pediatric nurse in the future.

“My grandfather is a pharmacist, so is my aunt,” Huner said. “As for being a pediatric nurse, I love to work with babies and help others.”