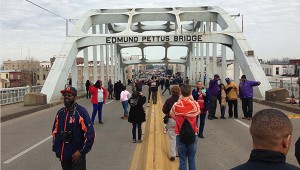 Crowds of people gather on the Edmund Pettis Bridge in Selma, Sunday before the ceremonial march.

Henry Lewis and Catherine Jordan had different perspectives on the Selma 50th Anniversary Annual Bridge Crossing Jubilee this weekend, but both were there.

Lewis had special seating at the staging area where his brother, U.S. Rep. John Lewis, D-Ga., introduced President Barack Obama on Saturday. Jordan had to climb atop a barricade just to see the Jumbotron that showed close up shots of the historic event.

But both were honored to be there.

Rep. Lewis is the only living “Big Six” leader of the American Civil Rights Movement. He became nationally known during his prominent role in the Selma to Montgomery march. He and fellow activist, Hosea Williams, led the march across the Edmund Pettus Bridge in Selma on March 7,1965.

“Saturday was a special moment for me and my family,” Henry Lewis said. “Having grown up in rural Pike County, I realized what this moment meant 50 years ago and what it means today. The crossing of the Edmund Pettus Bridge in 1965 made it possible for an African-American to be standing there Saturday as president of the United States.

“The 50th Anniversary of the Selma march was a special day for my brother, for Alabama and for the United States. The whole world was watching the little town of Selma, Alabama.”

Lewis said his five grandchildren, who attended Saturday’s event, will now have a better sense of what took place on the Selma to Montgomery March and the role their uncle played in the Civil Rights Movement.

“Our family is proud of John’s accomplishments,” he said. “And, through it all, he has remained humble. He continues to be involved in the movement for justice for all people.”

Jordan, of Troy, had to watch the historic event from Broad Street. She could only see the giant video screen. The sound was muffled so she was unable to hear Lewis introduce the president or his speech. But that didn’t matter. She was just honored to be in the crowd that was estimated at 40,000.

“I was excited to be going to the 50th Anniversary of the Selma march but it was not until I realized people from all over the country were coming that I was moved by the experience,” Jordan said. “We left Troy around 6 o’clock and it took us four and a half hours to get to Selma. Traffic was backed up for hours and we talked to people through the car windows – people from as far away as California.”

Jordan said traffic was often at a standstill and people became anxious that they were going to “miss the moment.”

“They pulled their cars off the road, got out and started walking,” Jordan said. “As they walked by us, we would tell them that downtown Selma was a long way but that didn’t matter. They just wanted to get there.”

The streets were jam-packed and there was no getting close to the staging area.

“But that didn’t matter,” Jordan said. “I was part of a history-making moment. I wasn’t hungry. I wasn’t thirsty. I was one of thousands of people that had come from all over — black, whites, young, old — for one purpose – to be a part of this time in our history. I wanted to cry thinking about the sacrifices that had been made for me to be a part of the anniversary celebration of that historic walk across the Edmund Pettus Bridge.”

As an international student at Troy University, Grishma Rimal also took advantage of the opportunity to be a part of the historic “moment.”

“In high school, we studied important figures in international events,” she said. “Dr. Martin Luther King, Jr. was a leader in the struggle for freedom and equality. In Nepal, it was natural for us to study about a man like him.”

When Rimal came to America, she had background knowledge of the Civil Rights Movement and understood why it was important and want to be a part of the 50th Anniversary of the Selma to Montgomery March. “Walking across the Edmund Pettus Bridge was an incredible experience,” she said. “The 50th anniversary of the march was an important event. Being among all those people who came to celebrate was inspiring. What I will remember most about that experience is that, although we have come a long way in bringing equality to all people, we still have a long way to go.”

For Vicki Robinson, a Troy Elementary School teacher, the walk across “the bridge” was inspirational.

“People of all nationalities and from all walks of life made their way across the Edmund Pettus Bridge,” Robinson said. “Walking across the bridge was cumbersome. People were walking in both directions but that didn’t matter. I was just glad to be a part of such an historic event.”

Robinson said she wanted to have the experience of participating in the 50th anniversary of “Bloody Sunday” but, for more than the personal experience.

“I wanted my children, who are ages 10 and 15, to have the opportunity to be a part of an historic event that brought about positive change. My son will be eligible to vote in three years. It was the footsteps across the Edmund Pettus Bridge that brought equality in voting rights. I want him to know that the right to vote is a gift – the gift of ‘Bloody Sunday.’”