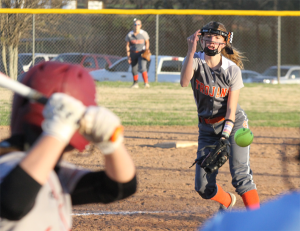 Just one year removed from finishing 6-30 overall, Charles Henderson softball’s turnaround season in 2015 is a thing of beauty to head coach Heather Mitchell.

In fact, her team’s obvious progress en route to a 7-6 record so far this season has actually left Mitchell “speechless.”

Saturday, the Lady Trojans continued their storybook start to the year, blowing through Carroll 15-0 and downing Andalusia 4-2 on its underdog run to the Troy Classic semi-finals, where they lost to Marbury 6-1.

“To go from what we did last year to go what we did this weekend makes me speechless,” Mitchell said. “I can’t say anything but positive things about this program and where it is going. They (the team) get it, and that is what it is all about.”

In its first game of the day, Charles Henderson met little opposition against Carroll.

In just four innings of play, Charles Henderson easily dispatched of the Lady Eagles 15-0 and did so behind a huge, four-run first inning.

In the bottom of the first, with two runners on base, Emma Kirkpatrick smacked a two-RBI triple to clear the bases, scoring Sidney Armstrong and Molly Kate Sanders.

On the ensuing at-bat, Tucker Earles followed up with an RBI double that scored Kirkpatrick, and Ally Stamey finished out the inning with an RBI single of her own, scoring Earles and giving Charles Henderson an early 4-0 lead.

In the second and third innings, Charles Henderson scored 11 unanswered runs, including a seven-run third inning, before the game was called in the top of the fourth inning.

In their second game of the day, the Lady Trojans took on Andalusia, downing the Lady Bulldogs 4-2.

Much like the game against Carroll, Charles Henderson benefitted from a big first inning against the Lady Bulldogs.

In the bottom of the first inning, Charles Henderson was able to load the bases after three-straight singles to open up the game.

Cleanup hitter Kirkpatrick was able to draw a walk, bringing in the Lady Trojans’ first run of the game.

“We don’t need the extraordinary,” Mitchell said. “We need the ground outs, the fly balls and then string together hits. When you do that, the scoreboard will work in your favor.”

In the tournament semi-finals, Charles Henderson’s dream run ended as the Lady Trojans fell 6-1 to Marbury.

After the two teams exchanged scoreless first and second innings, Marbury opened up the game in the top of the third after a three-run homerun to give the Lady Bulldogs the 3-0 advantage.

Charles Henderson was able to bring one run home in the bottom of the inning when Hannah Calhoun scored on a wild pitch, but that was all the offense the Lady Trojans could muster in the game, falling just short of a championship game berth.

But despite the losing effort, Mitchell was anything but disappointed in her team.

“You ask any coach what they need their program to do and that is buy in,” Mitchell said. “They played every pitch of that game to the last pitch. They were ready to play another inning before they said that was ballgame. They are playing with 100 percent heart and passion.”