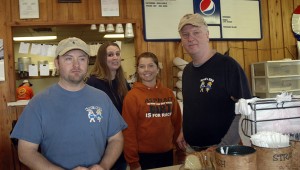 Hook’s Bar-B-Que in Troy and the Bar-B-Que House on Highway 231 north of Troy are among the barbeque “houses” from 52 Alabama cities that help make barbecue a “state passion.”

“A recent survey revealed that the highest percentage of restaurants in Alabama are barbecue versus those in any other state,” Sentell said. “What we are doing with ‘The Year of Alabama Barbecue’ is celebrating our barbecue heritage and making our state a destination for barbecue lovers across the country.”

Ricky Gilchrist might have planned it that way when he chose a location for his Hook’s barbecue restaurant in Troy or maybe not. But, when the smoke from the pits drifts over the nearby shopping center complex, folks can’t help but follow their noses.

Gilchrist opened Hook’s in February 2005 with a commitment to serve barbecue so good that it would keep people coming back for more.

His menu includes barbecued pork, chicken and ribs and barbeque potatoes. Barbeque nachos appetizers and salads topped with smoked meat are so filling they could be main dishes. Both the appetizers and salads are extremely popular with the young crowd. Of course, he serves the barbecue trinity – barbecue, baked beans and slaw.

Gilchrist chose Troy for several reasons. First, it was a university town with a population large enough to support his venture.

“I like small towns and Troy offered me the chance for a big city opportunity in a small town,” he said. “Also, the university was a great place to find energetic employees.”

Gilchrist said the secret — rather “a” secret — to his popular barbecue is that it’s cook over a real pit fire and it’s cooked slow, “real slow.”

“Barbecue is not fast food,” he said, with a smile. “You can’t hurry barbecue. You’ve got to cook it slow to get the flavor through and through.”

When Gilchrist opened Hook’s, he did so with a 10-year plan. In January, he made good on his plan to shoulder his golf bag and make a beeline to the golf course. He sold his popular barbecue restaurant to Adam Renfroe, who had worked for him and knew that owning a restaurant is not a 9 to 5 job.

“Nothing will change,” Gilchrist said. “You won’t know any difference except Adam will be here and I won’t.’

Renfroe said he’ll have the same staff and his commitment is also to serve barbecue so good that people will come back again and again.

“Everything will be the same,” he said, adding that his commitment to his customers and to the success of Hook’s is the same as that of his former boss.

Barbara McQuagge didn’t have the luxury of locating her Bar-B-Q-House near a busy shopping center, but she did have the smarts to locate it on busy U.S. Highway 231 north of Troy. And, just to make sure motorists didn’t miss it, she commissioned a sign artist to design a neon sign sporting a pink pig lounging in a flaming pit. The sign brings folks to the Bar-B-Que House, and the hickory smoked ribs and pulled pork keep them coming back.

McQuagge said the pink pig sign is a business icon and, like a magnet, it draws people to the barbecue.

“I wanted a sign that would be unique and would attract the attention of people on the highway,” she said. “It works. People stop all the time to take pictures. It’s good advertisement.”

The pink pig, the brainchild of Bill Flora, is on the inside cover page of “Alabama Barbecue” and that’s good advertising, too, McQuagge said.

But it’s a metal sign that hangs among the treetops that’s the real story of the Bar-B-Que house and reads “Bar-B-Que House — It’s World Famous.”

McQuagge said her barbecue is unique in that it is slow cooked – 12 hours – in a rotisserie over hickory wood and with a well-kept secret sauce.

“Everything we serve, from our ribs and barbecue to our potato salad and signature red velvet cake, is home cooked right here in the Bar-B-Que House where we’ve been barbecuing since 1982 and I’ll be here until I die.”

The Year of Alabama Barbecue website, www.alabamabbq.com, features a barbecue themed road trip and has a calendar listing of top barbecue events across the state including the BBQ & Blues Cook-Off in Foley on March 21, the Tri-State BBQ Festival in Dothan on April 10 and the Whistlestop Festival in Huntsville on May 1.

The website also links to the new smart phone app “Alabama BBQ Trail” that can be downloaded for free and has information on more than 75 barbecue restaurants in 52 cities and towns across the state.  The app has background on each of the restaurants and their best dishes.