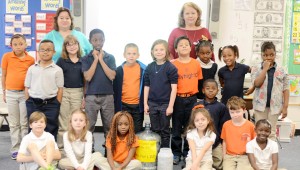 Dr. Seuss teaches children all sorts of things in his books, and on Thursday the author taught students at Troy Elementary School about being kind to others.

“In the spirit of Dr. Seuss’ “Horton Hears a Who!” each class will discuss and put into practice random acts of kindness individually and as a class,” said Teresa Sims, principal atTroy Elementary School. “Some of our students demonstrated acts of kindness today by opening doors for teachers and many thank you’s were extended. Although today has a special name, kindness is at the core of or character every day.”

The activity was part of Read Across America Week, which has been celebrated this week. The first grade a TES collected tabs from aluminum cans throughout the week. Once the project is over, the tabs can be sold. The money raised from the tab collection will go to the family of Keonte Brantley (LT), to help with finances as he battles cancer.

Debra Kelly’s class led the project. Kelly said that other grades have pitched in, knowing the importance of the cause.

“I think they need to be part of something that benefits other people,” Kelly said, stating how important it is to do kind things for others.

Brantley, 14, has an undifferentiated sarcoma, resulting from a mass found on one of his ribs. Troy City Schools has been selling wristbands to raise money for Brantley since Feb. 19. So far, this fundraiser has raised almost $2,000, according to Joy Scarbrough, one of the parents organizers. The wristbands have almost sold out, with only about 100 left.

“The response has been overwhelming to say the least,” Scarbrough said. “It’s truly amazing to see this community come together in times of need.”

T-shirts are now available for $12 and are being sold at every Troy City school in the front offices. The deadline to order is March 31.