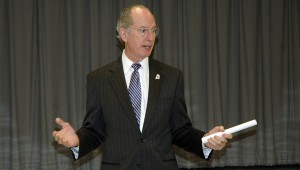 State Treasurer Young Boozer has the worst name in politics.

“When I ran for state treasurer four years ago, I had never run for a political office before,” he said. “When I ran for a second term, I ran unopposed.”

As a banker and investor, Boozer was highly qualified for the office that he sought, but he didn’t discount name recognition as a contributing factor when voters pulled the lever. Boozer’s political yard signs were in such demand that he stopped putting them up.

“I was extremely powerful among the 18 to 20-year old demographic who thought they were young boozers,” he said, laughing.

When Leno announced that a man named Young Boozer was running for state treasurer in Alabama, in today’s lingo, it “went viral.”

“Jay Leno’s comment about my name was the best thing that could have happened to me,” Boozer said.

That was then. Now, having the opportunity to oversee the Alabama state coffer is Boozer’s best thing.

“I like fixing things; I like solving problems,” he said. “Whether it’s in the private sector, the political arena, the business or private world, I have the same philosophy: Do the right thing; do it the right way and do it right away.”

One of the first problems that Boozer solved as state treasurer was the state’s failing PACT (Prepaid Affordable College Tuition) program.

“The program was structured wrong,” he said. “We started looking at the program in January 2011 and in June, we had the solution. We did the right thing, the right way and we did it right away.”

Boozer said the state’s College Counts scholarship program is designed to offer scholarships to good students who want to go to college.

“Students that score 36 on the ACT are going to get a free ride,” he said. “But the students who score 26 have fewer opportunities for scholarships. College Counts awards 150 one-year scholarships to assist students in getting started.”

Boozer said the state treasurer is Alabama’s “money manager” and that includes managing $100 million a day in state taxes as well as the $3 billion Alabama Trust Fund.

One of Boozer’s joys of the job is reuniting people with their money through the state’s Unclaimed Property program.

“Money is there, waiting to be claimed by people who have forgotten about it or didn’t know about it,” he said.

Boozer encouraged the students to continue their interest in financial matters because “money matters.”

“Money never goes out of style,” he said. “Money does matter. The more you know about money matters, the better off you’ll be. And, you are better off than many students because you are in this program. I like the concept of the business and finance academy. It gives you an advantage over other students. This is the beginning.”