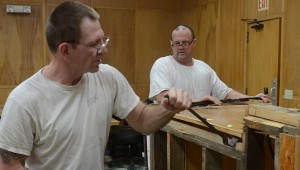 Workers from the Alabama Correctional Industries remodeling the courtroom at the Pike County Courthouse. 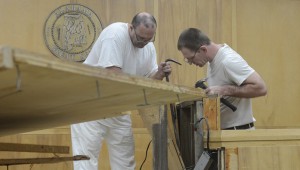 Workers from the Alabama Correctional Industries remodeling the courtroom at the Pike County Courthouse.

The demolition and remodeling of the main courtroom in the Pike County Courthouse began this week.

Neil Harris of Alabama Correctional Industries said renovations will include a new judge’s bench and reconfiguration of the jury box.

Circuit Judge Shannon Clark said the jury box will be expanded to include room for alternate jurors as well as the standard 12-member jury panels.

She said there had been complaints from people serving jury services who could not hear the witnesses nor see the evidence very well.

“We hope (the new courtroom) will make it more comfortable for them,” Clark said. “They will be able to see and hear better.”

Harris said the remodeling would also add one new audience rail to the courtroom.

Other changes in the courtroom are aimed at making it more functional. Clark said technological improvements will include the addition of a drop-down screen and projector.

In the past, lawyers have pulled televisions into the courtroom, posing risks of tripping over the cords, Clark said. The upgrade in technology helps the facility to be on par with the state system where there has been a transition into electronic files.

“This is a joint effort between the judicial branch and the County Commission which I am very appreciative of,” Clark said.

Harry Sanders, Pike County Commission Administrator, said the commissioners unanimously supported the renovation and is contributing $40,000 to the project.

Sanders said the money for the remodeling was from a fund specifically earmarked for county facility. “The construction doesn’t take money away from other projects,” he said. “There are several project going on in the courthouse and the remodeling just goes hand in hand with them.

“It will be an upgrade and an improvement in the courthouse. It will help the judges and the people who utilize the courtroom perform their duties better… It’ll just be a better environment for them to work in.”

Clark said the total estimate cost for the project was $80,000.

“So far everything has gone according to schedule,” she said. “We haven’t come across any major impediments. We appear to be on tract with the budget.”

Clark said they hope the courtroom would be back in use within two or three weeks.