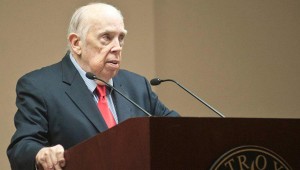 M. Stanton Evans passed away Tuesday morning. Evans will be greatly missed by the Troy community.

On news of his death, The New York Times called him “an early leader of the conservative movement.” Other media praised him as an important political writer. But Tuesday, colleagues and students in Troy simply remembered M. Stanton Evans as a mentor and friend.

“Stan Evans was one of the most intelligent people I have ever known,” said Dr. Jeff Spurlock, director of the Hall School of Journalism and Communication at Troy University. “Not only did Stan know everything from Socrates, the Civil War, to Ronald Reagan and the Beatles, he imparted his knowledge in a clever and witty approach.”

Evans was a noted journalist. In college, he acted as editor of the Yale Daily News. He became editor of the Indianapolis News Journal when he was 26, making him the youngest editor of a metropolitan daily newspaper in the United States. Evans was a commentator for CBS and National Public Radio and a syndicated columnist whose work appeared in large papers nationwide, including the Los Angeles Times. In 1977, he became the founding director of the National Journalism Center in Washington D.C.

And, in 1980, Evans took on a role as a visiting professor at Troy, traveling from D.C. to Troy at least once a year.

“He used lots of humor in his teaching, but in a subtle way,” Davis recalled. “He was always kind, but he didn’t pull any punches. He made you work hard and he made you rewrite. You kept working until you got it right.”

Davis, who is now executive assistant to the chancellor at Troy University, built a friendship with Evans that spanned 35 years. He even worked for Evans at the National Journalism Center.

“I knew him in both lives. He was Professor Evans,” Davis said. “And then he was also a journalist and conservative activist. The personas were very similar, but journalism and the business of reporting consumed him when he was here. Everything went into teaching his students. They were what kept him coming back.”

Evans became the school’s Buchanan Chair of Journalism and an annual symposium was named in his honor. Decades after Davis sat in Evans’ class, others still benefitted from his passion.

“I think the most important thing he did for each of his students was imparting an appreciation for his ceaseless style of questioning that forced us to come to terms with our own ideas and the ideas proposed by others,” Muzio said. “Every point or suggestion I made in his classes was dissected, reapplied and firmly, but gently challenged.”

Jason Johnson was in one of the last classes Evans taught at Troy in 2010. Johnson said the two held different political beliefs, but Evans was never discouraging.

“Stan — despite being a well-established voice in the conservative moment — never really prevented me from editorializing [my] thoughts and ideas,” Johnson said. “In fact, he worked with me to make those arguments stronger.”

Johnson and Muzio echoed many of Davis’ sentiments about the seasoned journalist, noting that he was kind and funny.

“Dry as a bone, straight as an arrow,” Johnson said of Evans’ quick wit.

Johnson said he also appreciated that Evans even visited a local nightspot to watch his band perform.

“At his age, I thought that was pretty cool,” Johnson shared.

“Cool” is something Evans embodied. Those who knew him said he was up for local adventures, wanted to meet new people and enjoyed going to Trojan sporting events.

“Stan was one of the most interesting people I’ve ever met,” said Aaron Taylor, a Troy University graduate and current production coordinator for the school’s television station. “I learned so much from him simply through lunch and dinner conversations. He was up on politics, but also knew about pop culture and Miley Cyrus.”

Dr. Judson Edwards, Dean of the Sorrell College of Business at Troy, said that while Evans enjoyed the conservative intellectual movement in Washington, that wasn’t what colored the pair’s talks.

“For many years, I could count on at least one phone call a week to field random questions on music trivia, discuss current pop culture, really anything except political talk — that was reserved for his friends in D.C. I believe his friends in Troy were an escape from that environment, and without a doubt, he loved everything about Troy, Alabama and Troy University.”

Edwards said he saved nearly all the phone messages Evans left him over the years, knowing that his eventual death would mean the end of those calls.

He said, “Meeting and becoming a friend of Stan Evans was one of the greatest gifts ever given to me in this life.”

Evans’ teaching, both in the classroom and out, was also a gift to the aspiring journalists who learned from him during the three decades he was at the university.

“He took the lessons that we were learning and he supported it with his life experience,” Davis remembered. “You don’t get that too much in the semi-rural South. We are pretty far away from Washington. He knew people we had only read about. He had seen things in person that we saw in the newspaper. It was an important perspective. One that will be missed here.”