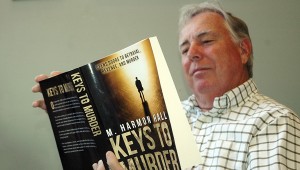 Mike Hall, a retired Pike County educator, has written his first murder mystery, titled “Keys to Murder.” The novel should be available for sale by mid-March. 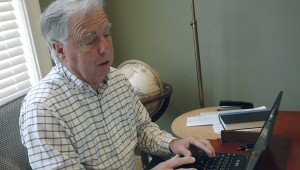 Hall is writing under the name of M. Harmon Hall.

That has a familiar tone to it.

Sort of like John Grisham or James Patterson or Tom Clancy.

Mike Hall laughs at the response to his pen name, but he also accepts those observations as compliments. Never mind that they came from friends after reading his first novel titled, “Keys to Murder.”

“No,” Hall said. He’s not in the Grisham league, not even in the ballpark, but it is an honor to have his pen name mentioned among the giants of the murder mystery novels.

“After my friends got over the surprise that I’ve actually written a novel and sit down and read it, they have been very encouraging,” Hall said. “And, they’ve not been any more surprised than I am that I’ve written a mystery novel – any kind of novel. I didn’t know I could do anything like that.”

But given the time — two years of retirement — Hall became bored playing golf and puttering around the house and decided to try his hand at writing.

He is a retired educator, having served as principal of Charles Henderson Middle School in Troy, Pike County High School in Brundidge and Banks Schools in Banks.

“Most of my career has been in education and, thinking back, I guess, it was when I was teaching American history that I first started telling stories,” he said. “I wanted the students to know more about our historical figures than was in the textbooks so I would tell stories about them and their lives. That was 25 years ago, and it was the beginning of my interest in telling stories.”

Hall said he’s not sure when he started thinking about writing a mystery novel.

“I’ve always enjoyed crime stories,” he said. “I’ve read a lot of mystery novels, and I watch a lot of crime television. I enjoy trying to solve the crimes, so I decided to write a fictional mystery for others to try to solve.”

During those six months, he wrote the story of a well-respected husband and wife, who were found dead in their home in the small town of Wilcox, N.C.

“Police believe this is a classic case of murder/suicide, but Detective MacArthur Nowlin is convinced it is a professional hit instead,” Hall said. “And, to add to the mystery a second murder occurs at the same time. It is an intriguing story.”

As the story developed, Hall did some hard copy research and Googled a lot. He watched crime shows on television to discover how their plots unfolded. And, all that time, he was developing the plot of his own mystery.

“I really had no idea how the story was going to end,” he said. “But, the more I got into writing it, the more intrigued and excited I was. I never thought it was in me to write something like that, but I almost couldn’t put it down.”

Hall said sometimes an idea for the novel would come to him, even when he was on the golf course.

“I would have to stop and write the idea down so I wouldn’t forget it,” he said. “Many times I would wake up during the night with an idea and would get up and write it down. It got to the point that I kept a pad and pen with me all the time.”

Writing the novel almost consumed Hall. He admitted that he literally became MacArthur Nowlin as he worked to solve the crime himself.

The novel took on a life of its own and Hall stepped back and let it go.

“The writing came easy,” he said. “The words kept coming, and the story continued to develop.”

He freed his mind to let the story twist and turn until it ran headlong into a surprise ending.

No one who has read “Keys to Murder” has solved the mystery.

“They all said they had no idea who committed the crime and were surprised, even shocked, at the ending,” Hall said. “Those who have read ‘Keys to Murder’ said they have enjoyed it and I appreciate knowing that. I wrote the novel the way I would have wanted to read it. I enjoyed every minute of writing it, from beginning to ‘the end.”

But, Hall soon realized the end of the writing process was just the beginning of getting it in print.

“I found a publisher for ‘Keys to Murder,’ and that’s when the real work began,” he said. “I had to get an editor to read and edit the book. Then I had to make the corrections and changes. Next, I had to find someone to design the cover. All of that took time.

“But the real time-consuming task was formatting the copy and getting everything just right because, once I push that ‘submit’ button and it goes to the publisher, there’s no turning back.”

Hall hopes to push the button this weekend and, hopefully, the book will be ready for sale by mid-March.

“I don’t know where the novel will take me from here, but there’s no way to put a price on the intrinsic value of the experience of writing a novel,” he said. “If I don’t sell one book, I’ve already gotten my money’s worth by writing it.”