Troy Police bids farewell to one of their own 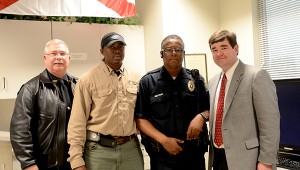 Although Edward Jay Walton didn’t want anything big for his retirement, scores of friends and co-workers gathered together in the Troy Police Department’s conference room Thursday to celebrate officer’s retirement after 25 years of service.

From former police chief Anthony Everage to city council members, everyone in attendance spoke highly of Walton and his service, but none spoke higher than current Police Chief Jimmy Ennis.

“Jay was the kind of officer who met the public well and had a great rapport as a police officer,” Ennis said. “That’s a great tool to be able to talk to people from all walks of life.”

“I got the opportunity to supervise Jay for two years, and he was always a good officer,” Weed said. “He was always helpful, and as a new officer on a new shift, he had a lot of experience on day shift. He wouldn’t let you make a mistake if he thought he could help you. He always had smile, always had a positive thing to say.”

“Everything everybody has said about Jay Walton today is true,” Barr said. “Don’t ever forget where you come from, and don’t forget all the rest of us that are still here.”

Troy Mayor Jason Reeves said he had known Walton since he was a young boy and was thankful to know men and women like Walton who dedicated their lives to serving the Troy Community on a daily basis.

“We appreciate so much what our officers do for us,” Reeves said. “For me, it’s always special because the police department has been a part of my life because my dad hired Edward Jay and I’ve known him since I was a little boy. I so much appreciate his service. He was always somebody you could depend on to be there, to do a hard job and do it the right way. We are desperately going to miss him.”

But, as for Walton, he said he was looking forward to retirement and already has plans of how to spend his time.

“For the next two weeks, I’ll probably go fishing.”