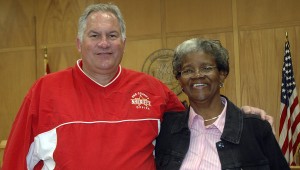 For 27 years, Olivia Pearson, Pike County Jail administrator, has been greeting people in and around the Pike County Courthouse with, “Let this be a good day.”

For Pearson every day in all those years has been a good day. She made sure of it.

Although Thursday was tinged with tears, it was another good day in Pearson’s life.

“I woke up before daylight Tuesday morning crying, thinking about today,” she said. “And, this morning, when I was getting dressed and thinking about coming down here, I cried again because I was sad. But I also felt like I had accomplished something important, knowing I had helped people along the way.”

On Thursday, Feb. 27, 2015, Olivia Pearson officially retired as jail administrator for the Pike County Jail. A retirement reception was held in her honor at the courthouse Thursday afternoon and people from all walks of life came to wish her well.

“Twenty-seven years is a long time to be a jailer,” Pearson said, with a smile. “But it was just in me. The Lord has been with me every day. Nobody but Jesus could help me stay this long.”

Pearson said back in 1988 Sheriff Harold Anderson called and offered her the job as jailer.

“I had worked at the city jail in Troy, and I had worked as a school crossing guard and I was a certified, EMT,” Pearson said. “I thought I could handle the job.”

Pearson loves people. She likes working with people and helping them. As a jailer, she was afforded many opportunities.

“From the first day, I was in charge,” she said. “I knew most of those who came to the jail and their families and they would usually listen to me. I did what I thought was the right thing to do. I was firm on my word and I kept talking to the Lord and He gave me kind and encouraging words to say … most of the time.”

Of the problems she encountered, Pearson said most of them were caused by visitors with negative attitudes, not by those behind bars.

“Sheriff (Russell) Thomas, the captains and lieutenants coached me and gave me good advice,” she said. “Sheriff Thomas told me to stand on my own and to run the jail. When I made a decision, he stood by me. And, I always did like my mama taught me to do – don’t just pray – hammer on the prayer, talk out loud and the Lord will see you through.”

Pearson said there were many times when she hammered hard and talked extra loud and the Lord always saw her through.

For Pearson, retirement day was a happy day and a sad day too.

“I’ve worked with good people, and I’m going to miss them,” she said. ‘They are my friends and they have been by my side for many years and I appreciate that. But, now it’s time to take some time to do the things I need to do and want to do. The Lord has been with me at the jail, and he’ll stay with me on through.”

Her hope is that all of those who came through the Pike County Jail will remember her and think she did right by them.

Sheriff Russell Thomas said he and Pearson came into the Pike County law enforcement arena about the same time.

“‘Miss Olivia’ has done an outstanding job at the jail,” he said. “We will find someone to fill her position but we will never find anyone to take her place. She has always been the captain of her ship. She has been firm when she needed to be firm and compassionate when she needed to be compassionate. I could always sleep better at night, knowing she had done her job. She will be greatly missed by all of us.”