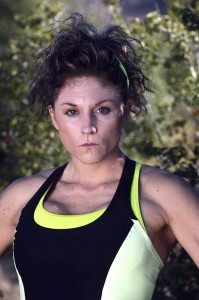 Chandler laughs at the mention of her being cast as a “Mean Girl” because she’s not that way at all.

But, when Steve Austin’s Broken Skull Challenge airs at 7 p.m. Sunday on Country Music Television (CMT), Chandler might appear to have a mean streak in her, especially when she’s in hand-to-hand combat with another “Mean Girl.”

Chandler will compete with eight other women in the Broken Skull Challenge and the “meanest” of them all will wear the title.

Chandler is not at liberty to say who wins the challenge but she can say that she had a great time competing.

“I can hardly wait to see the episode,” she said. “I’m anxious to see how the show has been edited and how I’m portrayed.

“It’s still hard to believe that I had the opportunity to be a part of Steve Austin’s Broken Skull Challenge. It was an amazing.”

Had Chandler and her husband not been watching the series on television and had she not acted on a whim, she would not have had that amazing opportunity.

Responding to the requests for applications for the “challenge” seemed like a fun thing for Chandler to do.

“So, I got on my cell phone and applied by sending my name, occupation and picture,” Chandler said. “But I didn’t expect it to go anywhere.’

To Chandler’s surprise, she was asked to participate in a phone interview and then in a skype interview. Both, she thought, went well.

But three weeks passed and Chandler heard nothing from the skype interview. Another week passed and she had almost given up any hope for being selected.

Then, she received a plane ticket in the mail and instructions to be Los Angeles in a week.

“At first, it was hard to believe,” Chandler said. “But I had to believe and get ready to go, mentally and physically.”

Chandler was chosen from entries all around the country. She thinks what got her a spot on the show was her fitness routine and her competition experience in the International Federation of Body Building.

In November, Chandler was in Los Angels and ready for the opportunity to compete.

“Eight of us were chosen for my episode and we came from all walks of life,” she said. “They put us up in a nice hotel room but they kept us away from each as much as they could. We all have competitive natures and they didn’t us want to form friendships that might effect the way we competed.”

The first morning, the women were up at 4 a.m. to take physicals before the competition began. Then, there were two days of “grueling” competition.

Then the sun would hit. I’m used to Alabama, but the sun was blazing hot out there. We were allowed to have water but none of the energy drinks. We had to do it all on our own.”

Chandler said most of the competition was what she expected – obstacle-type events –ropes, walls, “just the typical obstacle course challenges.”

But, not matter how cold or hot the weather or how tough and grueling the competition, Chandler said, bottom line, it was fun.

“Amazing and I’d love to do it again,” she said. “Steve Austin was super nice. It was obvious that he really cared about us and our health. He made sure that we rested enough and stretched out and were ready to compete. He respected the fact that we took care of our bodies and were committed to a healthy lifestyle.”

Competing in the Broken Skull Competition was a fantastic experience for Chandler. She is looking forward to Sunday night and admitted she will be a little nervous when the clock hands tick toward 7 p.m.

“I’ve not been able to tell anyone, not even my husband, who won,” Chandler said. “And, how much I’ll be on the show, I don’t know and really that doesn’t matter. Just being on the show proves that hard work does pay off.

And, being on the show puts my name out there and should opens door for me. I was a great experience and I was truly blessed to have that opportunity.”