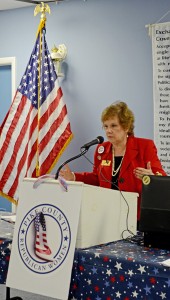 The Pike County Republican Women came together Wednesday to discuss the damage that Common Core State Standards Initiative is having on school systems.

“A lot is going on in our world right now,” said Virginia Hamm, president of the Pike County Republican Women. “Most of it is very unsettling.”

Betty Peters, District 2 State School Board member, told the approximately 31 people at the monthly meet that the Common Core is described as “a total transformation of education.” Peters said this is true, but it is not a good transformation. Common Core applies to preschool through two-year colleges, and is showing up in four-year colleges. The Common Core has changed standardized tests such as the GED, SAT and ACT.

Peters was one of the two State School Board members to vote against Common Core for Alabama in 2010. She, along with Gov. Robert Bentley, and one more board member voted to repeal to curriculum standards; however, that vote was the minority once again.

“We were told it was going to be English language arts and math,” Peters said. “Without any explanation on the day they voted, they added literacy, social studies, science and technology to the ELA standards.

“They were able to bring in all sorts of stuff that had nothing to do with English or math.”

One of the main issues Peters has with Common Core, is the way that math is being taught. She described a situation where a student was getting all of the answers correct, but receiving no credit because the answer was not reached the way Common Core teaches.

“We don’t all learn the same way,” Peters said. “What we’re doing is taking one strategy, that has never been proven. They need to be learning their math facts. Once you get that, it gets automatic. We’re not giving them the basic. They’re not going to be ready when they get further up. All the technology in the world won’t get us there.

“America has had a history of excellence in math, why are we throwing it aside?”

Peters said parents from her district have contacted her, complaining about what their children are experiencing in school.

“We have got to do something about this,” Peters said.

According to Peters, some states are stopping their use of the Common Core system, and some school systems are dropping the program as well. That goes under the radar, she said.

Peters said to voice any concerns about Common Core, contact Ella Bell, vice president of District 5 in the State Board of Education, or Gov. Robert Bentley.