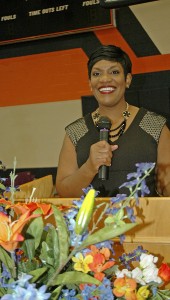 Wednesday was a homecoming of sorts for Tonya Terry.

She was back at her alma mater, Charles Henderson High School, as the featured speaker at the school’s annual Black History Program.

Terry has achieved success as a member of WSFA Television’s news team. She anchors “Today in Alabama” and “Alabama Live!” each morning and, in so doing, she is fulfilling her goal of letting her voice be heard.

As a student at CHHS, Terry said she found her role models in her hometown.

“I found my role models at home, at church and at school,” she said.

From those role models, Terry learned what is most important in life.

“I don’t remember admiring stardom,” she told the students. “I wasn’t after fortune and fame. I wanted my voice to be heard.”

Speaking before the CHHS student body, Terry had yet another opportunity for her voice to be heard.

“Some people say there is no reason to have a month set aside for Black History,” she said. “But I say Black folks earned the opportunity to spotlight their contributions to a society that, for a long time, saw us as second-class citizens. And, until there is equal time given in history classes across the country, Black History Month isn’t going any where.”

Terry said the primary goal of Black History Month is to serve as a reminder to African Americans of their rich heritage.

“Black History Month also teaches us that, if we carry within ourselves the memory of the journey of our people, it will remind us that we are evidence of the success of that journey.

“For all Americans, the goal of Black History Month is to expose the larger community to the rich heritage, culture and history of African Americas and to eliminate some of the barriers that divide us as a nation.”

Terry said as a morning news anchor, her voice is the first many people hear in the mornings.

“I don’t take that for granted, “ she said. “And, your voice – no matter who you are – is just as important and can make a difference in the lives of others, too.”

Terry acknowledged the accomplishments of many African Americans throughout history.

“Millions of African Americans have made this nation the country that we, as Americans, love and cherish,” she said. “But, there have been few individuals that have struggle, sacrificed and struggled more than the great warriors of the Civil Rights Movement. “

Terry said the warriors’ efforts were, not only for African Americans, but also for all of America.

“America is great because we are here and we are here because of the journey of our people,” Terry said. “Whether our families came to this country by force or by choice, we, as descendants of Africans, have since found that our country is a true land of opportunity. We had pursed that opportunity for ourselves and we have expanded those opportunities for all to seek.

“We have progressed from slaves and slave labor to doctors, lawyers, entrepreneurs, scientists, professors and politicians. Our progress is evidence of the journey that has taken decades to travel along miles of history’s highways.”

Terry said in thinking about the students to whom she would be speaking, she thought about the reality show “The Voice.”

“On ‘The Voice,’ people come from all walks of life, from all across the country to compete,” she said. “All of us here today have different strengths and weaknesses and we all have a voice to share.

“I may not have the voice of Dr. Martin Luther King, Jr. who said, ‘I have a dream that my four little children will one day live in a nation where they will not be judged by the color of their skin but by the content of their character.’”

Terry said King envisioned a time when whites and black could join hands as sisters and brothers. She asked that the CHHS students make that dream a reality “right here in this room” by joining hands.

“You are the dream,” she said. “His voice is your voice. And you have a voice, too, a voice that can change the world. So follow in the footsteps of dreamers, inventors and innovators. Make some noise. Be sure your voice is heard.”

MAKING MAYORS: Students see government from the inside