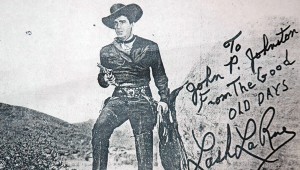 When Lash La Rue, the cowboy idol of the silver screen, came to the Brundidge Theater in the early 1950s to promote his new picture show, “The Vanishing Outpost,” the whole town was in a stir.

Back in those days, Saturday matinee cowboy stars were looked upon almost as idols. For one of them to come to Brundidge was reason for excitement.

Lash LaRue was a handsome figure in his black leather boots, black satin shirt and black 10-gallon hat. He could right any wrong with his two-holster guns and a crack of his long, black whip.

People of all ages came to Brundidge to see the cowboy with the cracking whip and his sidekick Fuzzy St. John. It was said that grown men took seats from little children that Saturday afternoon.

John Phillip Johnston’s mother worked at the Western Union and she asked him if he would take a telegram to Lash La Rue down at the theater.

Like any little boy would, Johnston couldn’t hide the excitement of the possibility of seeing his cowboy hero in person.

“When I got to the theater, I couldn’t believe my eyes,” Johnston said. “Lash La Rue was sitting at a desk autographing glossy 8- by-10s of himself. There was a stack of his comic books right next to him. I gave him the telegram and he asked how much he owed me.”

Johnston shook his head, indicating the cowboy owned him nothing.

“All I could do was stare at the comic books,” Johnston said. “He asked me if I wanted a picture and a comic book. He couldn’t have given me anything I wanted more.”

“I went home with my comic books and photo and I’ve still got them tucked away somewhere,” Johnston said. “But that was one of the most exciting Saturdays of my young life. I’ll always remember how lucky I was to get to meet a star of the silver screen.”