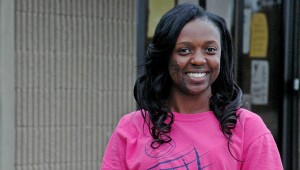 Messenger Photo/Courtney Patterson
Selenthia McGuire volunteers at The Boys and Girls Club to help kids who are members, just like she once was. McGuire is a junior at Charles Henderson High School and is on the CHHS volleyball and track teams.

Busy is an understatement when describing Selenthia McGuire. Being on the A/B honor roll, working a part-time job, volunteering and many other activities keep her busy, but they definitely do not slow her success.

“I’ve been coming here since I was little,” she said. “I’ve been interested in seeing how The Boys and Girls Club would change.”

The club impacted her so much that she decided to volunteer herself, so she could help other children.

“It kept me from peer pressure,” she said.

“It kept me physically active. It gave me something to do besides smoking and drinking like other kids not at the club.”

During The Boys and Girls Club “power hour,” McGuire helps other students with their homework so they can finish it while they are at the club and still be able to participate in other club activities.

Although she is a junior, McGuire is already making plans after her high school graduation. She plans to attend Troy University and wants to become a lawyer.

McGuire also works a part-time job at Wendy’s and is on the CHHS volleyball and track teams. She plans to continue to play sports in college so she can stay active.

“I want to do something with my life,” she said.