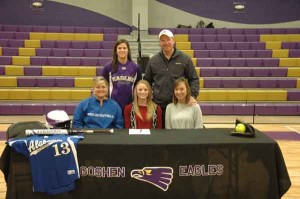 Once an Eagle, always an Eagle.

“It (signing on Wednesday) means a lot,” Galloway said. “I’ve been working so hard and I am not going to be with them (the team) next year, so I am just glad that they can share this moment with me.”

Galloway has been a staple of the Goshen pitching staff over the years.

In 2014, Galloway carried Goshen through its postseason campaign, serving as the team’s only pitcher down the stretch as injuries took their toll on the team.

This offseason, Galloway was named to the 2014 ASWA All-State Team after helping Goshen to its third-straight trip to the state playoffs.

“Lizzy is awesome,” Goshen head softball coach Amy Warrick said. “Lizzy has taken this team on her shoulders, and last year, we came down and had our other pitcher get hurt, and we went all the way to state behind Lizzy. (She) is a hard worker and I have no doubt she will succeed in whatever she wants to do. She sets her goals and goes after it.”

Galloway was equally as effective as a hitter as she was on the mound for Goshen last year.

According to MaxPreps, Galloway finished the 2014 season with a .391 batting average with 24 hits and 21 RBIs.

Galloway will hope to finish her senior season on a similar note as Goshen looks to make a repeat appearance at the playoffs.

“We’re going to state this year, and we’re going to do it behind Lizzy,” Warrick said. “We expect good things out of her (Galloway) pitching and hitting. Pitching is what she stands out with and she is an awesome batter as well.”

Though Galloway received other scholarship offers from Tennessee and other teams around Alabama, she said choosing Alabama Southern was easy.

“They (Alabama Southern) really act as a family down there, and everyone knows each other and everyone is really nice,” Galloway said. “It’s like a family atmosphere at college.”

“She’s my oldest, and I’m extremely proud for her,” Chris said. “It is going to be a great school and learning environment for her. They have great facilities and coaches. She’s going to get a good education.”

Lizzy’s future head coach at Alabama Southern, Brooke Powell, was in attendance Wednesday as well to see the future Lady Eagle sign on to be part of the team.

Powell said she looks forward to the skillset that Lizzie will bring to the table.

“I think she is going to bring a lot of versatility to our team,” Powell said. “She is left handed and is a riseball pitcher. As far as an overall athlete, I think she is a great athlete who will come in and be a huge success in our program.”

And as she signed on the dotted line Wednesday with her teammates watching, Lizzie said she couldn’t wait to start her career with Alabama Southern, but would always miss and remember her Goshen softball family.

“I’ll miss all of the girls,” Lizzie said. “They’re like my sisters, and I am going to miss my coach, Amy. She is one of the best coaches I’ve had.”

New era for the MLB?