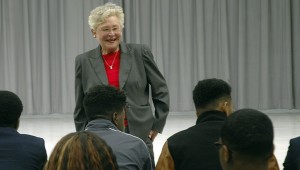 Ivey spoke to the students about ways to be effective citizen leaders and encouraged them to make a difference where they live.

“Be engaged,” Ivey told the students. “Separate yourself from your peers by doing more and being more. Always do more than is required of you.”

Ivey told the students that, to be an effective citizen leader, it is also important to know how to communicate.

“Look people in the eyes when you talk with them,” she said. “That lets them know you are interested and trustworthy. Be sincere. Sincerity is a must when conveying a message. Sincerity is the key,”

So is what one wears.

Ivey told the students to dress modestly and stay way from apparel that will be the focus of a later conversation.

“Don’t wear anything that people will be talking about when you leave,” she said. “You want people to talk about your attributes, not what you are were wearing.”

She gave the students a tip about the placement of a nametag.

“Put your nametag on the right side,” she said. “Then, when you shake hands the other person will be able to see your nametag and will better remember your name and you.”

The lieutenant governor talked briefly about the upcoming legislative session.

Ivey is a native of Camden. She has had a career in the private sector as a banker and assistant hospital administrator as well as a career in public service.

Her public service includes being appointed by three governors to various positions in state government, including assistant director of the Department of Commerce, formerly known as the Alabama Development Office.