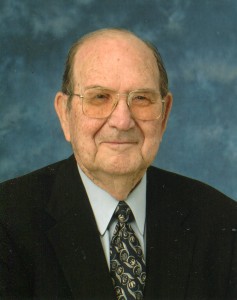 He was preceded in death by his parents, F. Alex Collins and Vestie Kinsaul Collins; his wife of 65 years, Ruth Bassett Collins; two brothers, James F. Collins and Francis A. Collins, Jr.; two sisters, Norma Collins Vaughn and Jacqueline Collins Becker. He is survived by his two sons, H. Ray Collins, Jr., Ph.D. (Sheila) and Gene B. Collins (Marleen); sister, Mary Collins Gooch; step­sister, Martha Collins Plant; and step-brother, Larry K Collins; three grandchildren, Jean Clair Collins Emmett (Matt), Catherine Rae Collins, and Sandy Richards Lamb (Ernest); three great grandchildren, Justin, Katie Beth, and Price; and two great great grandchildren. Dr. Collins was born on March 14, 1919, and grew up on a farm in the rural community of High Bluff on the outskirts of Hartford, AL. He was the fourth of six children and suffered the loss of his mother at the early age of four. His father re­married and a step­sister and step­brother soon became members of the family. His lack of interest in farming led to his arrival at Troy University, then known as Troy State Teachers College in Troy, AL. He worked his way through college playing trombone in the first band organized at the college  and was the featured soloist as well as being elected president of the band. He met and married his wife of 65 years, Ruth F. Bassett, while at college. After finishing college, the couple moved to Florida and taught school in Freeport and Jay, FL. They soon returned to Troy where he accepted his first position as a principal at Zion Chapel School. In 1949, he was appointed principal of Goshen High School where he remained until he became the Superintendent of the Pike County School System in 1966.

During his time in Troy, he also was a successful businessman owning several businesses as well as providing capital for other ventures. At one time he owned Collins Mercantile, The Corner Store, Farmer’s Hardware, Rite Price Appliance, Town & Country Furniture (Enterprise, AL), H & H Finance, Ray­Gene Mining Company, B & C Mining Co and B & C Construction Co. He coordinated the establishment of Troy’s first radio station, WTBF, with a group including Marvin Byrd, Fredrick Henderson and Roy Crow among others. Although his business ventures were lucrative, he decided to return to graduate school at the University of Alabama and enrolled in the doctoral program which he completed in 1968. He also did postgraduate work at Columbia University in New York and was asked to join the faculty as an adjunct professor. In 1970, he was appointed Superintendent of the Mobile County School System and served in that position until his retirement in 1976. During his tenure he led the school system through the very turbulent period of desegregation operating under a Federal court order issued by his lifelong friend Judge Vergil Pittman. Columbia University developed an international program through the US Department of State to offer graduate level courses to staff members in select embassies and invited Dr. Collins to join the staff as an adjunct professor. During the first summer, he lived and taught in Tehran, Iran (before the fall of the Shah) and the next summer in Kuala Lumpur. In subsequent years, he taught as an adjunct professor for the University of Alabama’s International Program in Bogota and Cali Colombia, as well as Mexico City. After retirement, Dr. Collins established the Spring Hill Educational Laboratory on the campus of Spring Hill College and secured funding through a federal grant to operate it. He also joined the George M. Wood Company in Montgomery, AL, and partnered with Bill Crane to provide municipal bond financing for small school systems throughout the South without which most would have been unable to fund a capital outlay program.

In later years, he turned to public service serving as a member of the Board of Trustees of Troy University and later the President’s Cabinet for Leadership, Mobile Housing Board, Regional Director of AARP, Southern State Director for the American Association of School Administrators, Evaluator for the U.S. Office of Education, Board of Directors for Via Center and Senior Deacon at the First Baptist Church of Mobile, AL. He was a member of many organizations including Mensa, Intertel and the Rotary Club (Paul Harris Fellow), as well as several private organizations. He was recognized as alumnus of year in 1969 by Troy University; in 1991, he received the Alabama Hall of Fame Educator Award; 2011, he received Troy University’s Distinguished Leadership Award; in 1977, he was named Outstanding Public Educator by the Capstone Society; and in 2005, the Mobile Board of Education honored him by naming the Collins­Rhodes Elementary school for him. Special thanks are offered to the Spring Hill Manor staff for their kind treatment and interest in caring for Dr. Collins in the final stage of his life. Visitation will be held in Troy, AL, at Green Hills Funeral Home Chapel on Thursday, February 26, at 10:00AM followed by a funeral service at 11:00AM. Burial will follow in Green Hills Memorial Cemetery.