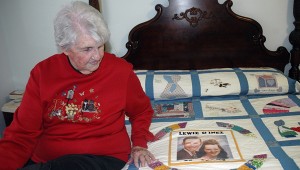 Inez Winton is now at home at Noble Manor. The memory quilt that family and friends gave her and her husband, Lewie, on their 50th wedding anniversary keeps him and them close.

Not many couples spend the night of their 50th wedding anniversary wrapped in the warmth and love of their family and friends.

Lewie and Inez Winton were so blessed … and literally.

On the couple’s 50th wedding anniversary, June 17, 1994, their families and friends surprised them with a quilt made from individually designed squares of special significance.

“The quilt was a surprise, and it meant so much to us,” Inez Winton said. “So many family members and friends had made a square, and each one had meaning for us.”

Winton said one square on the quilt is embroidered with a log cabin design, another has a school bus, and there’s one with the American Airlines logo.

“Lewie’s great-grandfather built a log cabin back in 1830 for his family,” Winton said. “Several members of the family lived in it over the years. Of course, it’s gone now. My sister-in-law drove a school bus for 20 years, from 1974-94. That’s the reason for that square. And Lewie’s uncle, who was like a brother to him, worked for American Airlines.”

Lewie Winton served Grundy County, Tenn. as its sheriff for two terms, and his service is honored on the quilt.

“While Lewie was sheriff, he came in contact with a lot of important people,” Winton said. “One of the squares was done by a circuit judge, and the square with the scales of justice was done by a district attorney.

“And, we all used Clabber Girl baking powder. Our niece did that square. There are so many family members and friends represented. The square with the scripture, Proverbs 3:5, means a lot to me: ‘Lean not to your own understanding.’”

Another square depicts, in thread, a farm couple, he, on a tractor and, she, with an iron skillet and an ear of corn. Both Wintons grew up on the farm, and he farmed a large part of their married life.

“All the squares bring memories of times and special people,” she said.

Winton pointed to one square that will “blow your mind.”

“We were expecting our first baby, and Lewie was out of work,” Winton said. “I had $20 that I had saved to buy fabric to make baby clothes. I put the $20 bill in an envelope with my order to Sears and put it in the mailbox. Somehow, a bluebird got in the mailbox, and I just happened to see it fly off with the $20 bill in its beak.”

That story had been told many times over the years, and it had been preserved in embroidery thread on the memory quilt.

All of the squares are Winton’s favorites, but her favorite is the one in the middle. It’s a photocopy of young Mr. and Mrs. Lewie Winton with congratulations on 50 years of marriage.

Lewie Winton died in 2004, and his bride of 60 years continued to make her home in middle Tennessee.

“I was born and raised in Tracy City, on the plateau,” she said. “We lived on a farm and raised hay, corn, oaks and beans. We had cows and horses and four mules to pull the plow and other farm equipment.

“I got on the school bus at six o’clock in the morning and got off at six o’clock at night. I milked two cows before supper. We didn’t have electricity or running water. We got our water from the spring. I scrubbed clothes on the scrub board. It was hard coming up.”

One of the most exciting things that ever happened to Winton was when she was 13 years old.

“In 1939, we got to go to the Worlds Fair in New York City,” she said. “That’s when television was introduced to the world. We had never heard of such a thing as television. But, there was a sign that said to ‘enter’ if you wanted to be on television.”

Winton was with her brother who didn’t want to enter but she entered and appeared on the television screen. “That was exciting.”

Winton has always had something going on inside her head. She loved poetry and, as a young child, she was putting poems on paper.

She wrote poems about life in the country, about honeybees and about falling in love.

“Lewie’s mother said, when he was about 5 years old, they were walking by our house,” Winton said. “Lewie pulled on his mother’s arm and asked her if she saw that little black-headed girl. ‘Well, I’m going to marry her,’ he said. And, he did marry me.”

Lewie and Inez Winton had four children, three daughters and a son. Their daughters live in distant places, Louisiana, New Mexico and Rome, Italy. Their son is pastor of First United Methodist Church in Troy. And, that’s how it came to be that Winton is a resident at Noble Manor.

“I had to go in the hospital, and coming out, the doctor didn’t think I needed to live by myself,” she said. “I didn’t agree. I wanted to stay in my home, and I fought coming here for a while.”

One of Winton’s poems describes her feelings: I praise God for this place. I don’t know where it will be. But, whatever comes my way, I will praise Him on bended knee.

“I’ve met a lot of nice people in Troy, and we’re all friends here at Noble Manor. I’m content,” she said. “I am happy and content.” 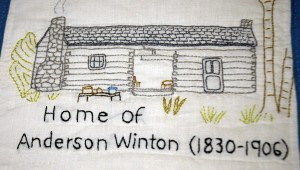 Lewie Winton’s great-grandfather built a log cabin that was home for several generations of Wintons.