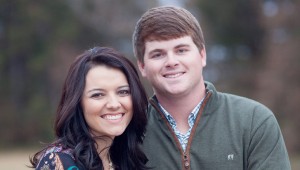 Brooklyn Evans is engaged to marry William Starling on June 27, 2015.

Mr. and Mrs. Joe Bob Evans and Mr. and Mrs. Bo Luker of Pell City, Ala. announce the engagement and forthcoming marriage of their daughter, Brooklyn Olivia Evans to William Wallace Starling, son of Mr. and Mrs. Sidney R. Starling Junior of Troy.

Miss Evans is a 2010 graduate of Pell City High School and attended Auburn University where she earned a Bachelor of Science degree in early childhood education in 2014.

She is a member of Sigma Kappa Sorority. She is presently employed as a third grade teacher at Eden Elementary School in Pell City.

Mr. Starling is a 2010 graduate of Pike Liberal Arts School and attended Southern Union Community College and then Troy University.

He received his Bachelor of Science degree from Troy University in sports and fitness management in 2014. He was a member of the Southern Union baseball team and the Troy University baseball team. He is currently employed as a claims adjuster with ALFA insurance in Jacksonville.