Construction Zone: Area around downtown standpipe to be repaved 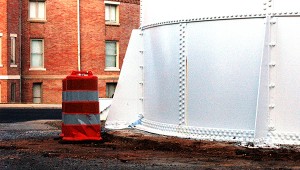 During the repainting of the standpipe located in downtown Troy, the paved area around the water tower was damaged. Mike Davis, Troy Utilities assistant director, said the city would be repaving the area around the standpipe and the parking lot near by. The project will last approximately two weeks, and Davis said the city hoped to have the project started the week of Monday, April 20.

A project Troy Mayor Jason Reeves hoped would be done in his first term in office is finally reaching its last leg.

Mike Davis, assistant manager for Troy Utilities, said during the process of repainting the standpipe just off The Square, the parking lot surrounding the space had been badly damaged.

“Prior to the standpipe being painted we did a lot of underground utility work,” Davis said. “Now that the standpipe has been completed, we are going to go back and put everything back to normal and cover the surfaces with concrete this time.”

Davis said it would take only short period of time for the work to be completed.

“It’s going to take about two weeks for the project to be done,” Davis said. “It’s a short period of time. A local contractor has received the bid award, and we are going to start that after tax season.”

Davis said the decision to start the week after April 15 was due to the fact that H&R Block employees are the primary users of the parking lot.

The anticipated start date for the project is Monday, April 20, and Davis said downtown traffic flow should not be interrupted during construction.

“There should be very little disruption in traffic,” Davis said. “There may be a day or two where we block a certain area between Oak and Three Notch Street, but we don’t feel like there should be a hindrance to traffic.”

Davis said the project’s anticipated finish date would be closer to the end of April or first week of May.

Davis said from a city standpoint, everyone was pleased with the updates being made to the standpipe.

“It had been a project that the mayor wanted to do in his first term, and the standpipe’s paint job was nearly 30 years old,” Davis said. “It was one of the projects we needed to do not only for the cosmetic beauty for downtown, but we use the water tank and we needed to get it back to standards.”