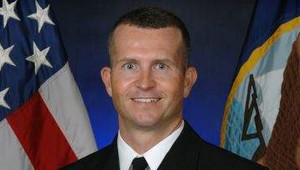 Mary McQuagge served 20 years in the U.S. Navy and now teaches for a Junior ROTC program in Maryland.

“(Teaching) is more stressful (than being in the Navy), but I love it,” McQuagge said.

McQuagge said the 20 years he spent in the Navy helped him to broaden his worldview of diversity.

“I joined the military with the goals to make something of myself and to get a college education during my off-duty time,” he said. “I feel privileged that I could lead the best and brightest that America had to offer.”

McQuagge said he had several memorable experiences during his serving time, being abroad in more than 30 countries. He said an important thing he learned from being a Navy officer is leadership, and now he is passing it on to his students.

“I teach military history, leadership and citizenship,” McQuagge said. “I teach the students how to march and how to wear uniforms.”

With his goals before joining the Navy accomplished, McQuagge said his new goal for the future is getting better at his unfamiliar, but interesting, job as a teacher.

Upon graduation, he reported to his first command, Strike Fighter Squadron 27 in Atsugi, Japan.

White attached to the squadron he deployed on the USS Independence (CV-62) and USS Kitty Hawk (CV-63), was designated an aviation warfare specialist and advanced to petty officer third class.

In 1999, he transferred to Naval Air Station Whidbey Island, Wash. While attached to the command, he deployed to Saudi Arabia and Germany and was promoted to petty officer second class.

He attended Master-At-Arms “A” school in 2001 and transferred to the Security Department at Naval Air Facility in Atsugi, Japan. He served as a watch commander and was advanced to petty officer first class, while at the command.

In 2005, he transferred to the Naval Nuclear Power Training command.

While attached to the command, he deployed to Kuwait and was advanced to chief petty officer.

In 2008, he transferred to Naval Support Activity in Naples, Italy and while there deployed to Djibouti, Africa, where he served as the harbor security leading chief petty officer and was designated an expeditionary warfare specialist.

In 2010, he transferred to Naval Support Activity Bethesda, where he served as the senior enlisted leader and security department leading chief petty officer.

Chief McQuagge and his wife, Yasuko, are the proud parents of three boys Nolan, Marshall and Mason.

McQuagge’s mother, Barbara McQuagge, said she was very proud of her son.

“He loved the Navy but I am glad that he is doing something he enjoys so quickly (after his retirement),” she said.