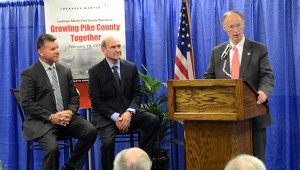 Gov. Robert Bentley, visited Troy Thursday to announce the expansion of Lockheed Martin’s Pike County Operations facility in hopes of providing an additional 240 jobs to the Pike County area by 2020.

Lockheed Martin and the State of Alabama have partnered together to add an additional 240 employees to the Pike County Operations facility by the end of 2020.

“Lockheed Martin has been a strong employer in Pike County for 20 years, and today we celebrate the announcement of an enhanced partnership that will create a total of 240 additional jobs before 2020 for the hard-working families in Troy,” said Gov. Robert Bentley said during the announcement on Thursday. “Job creation has always been my top priority, and it is important to see existing companies retain and expand their workforce. Lockheed Martin’s commitment to Pike County is strong, and I look forward to a continued partnership with the company.”

The expansion is thanks to an increase in domestic and international orders for the Joint Air-to-Surface Standoff Missile and the Terminal High Altitude Defense missile, which are both assembled in Pike County.

“Alabama is investing in Lockheed Martin and we are pleased to invest in the community in return,” said Vice President of Production Operations Randy O’Neal.

“We have already spent over $15 million on capital improvements at the Troy facility under this agreement and will spend an additional $40 million by 2020. We project that Lockheed Martin and its Pike County Operations employees will have injected $500 million into the state economy between 2014 and 2017.”

Pike County Commissioner Joey Jackson, District 6, said the expansion was a great opportunity for not only Lockheed Martin but also for Pike County.

“Any time we are employing people and we have them working here and they’re spending money in Pike County and the tax money is staying here in Pike County, that’s what we want,” Jackson said. “We want growth.”

Pike County currently has 327 employees who work at the Lockheed Martin Pike County Operations Center, and Jackson said once the project begins, 50 more would be hired.

“As soon as this new expansion comes online, we’re going to higher 50 more people in Pike County and within the next four years, there’s an additional 200 jobs coming into Pike County, so that’s great,” Jackson said.

O’Neal said the choice to expand the Pike County was because of the heritage the company has with Pike County.

“There is a heritage here, we’ve been here for 20 years,” O’Neal said. “The second thing, and maybe most important, is that the people here are incredible. They’re fantastic. They come to work every day.

They know what they’re job is. They understand their purpose for being here. Many of them have either served or have family members serving in the military so they have a very personal attachment to the job they do, the work they do and it’s very important to them.”

The Pike County Operations facility is a 3,863-acre plant located six miles northeast of Troy. It has been named one of the country’s 10 best industrial plants and in 2006 won the Alabama Manufacturer of the Year Award. 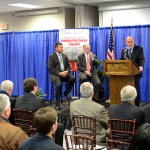 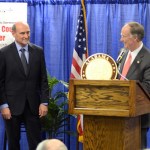