Pike County Probate Judge Wes Allen was the program guest of Rotarian Danny Graham at the Wednesday meeting of the Brundidge Rotary Club.

Allen was recently cast in the national spotlight when he appeared on CBS Evening News and stated that he would not be force to violate his religious belief by facilitating same sex marriages. Allen also said that he would no longer issue marriage licenses or perform marriage ceremonies.

Allen spoke to the Rotarians about his decision, which he said, allows him to obey the law and uphold his Christian beliefs. He cited state law that says marriage licenses “may” be issued by probate judges.

“That word, ‘may’ gives me the option, and I chose not to issue the licenses,” he said. “Before I made the decision to be interviewed on CBS Evening News, I wanted to make sure that my appearance would be used for good, not turned around on us. I did not want it to portray us in a negative way.” 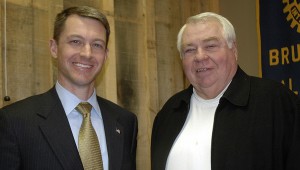 Allen said he prayed about the decision with his wife, Cae, and others involved in his decision to no longer issue marriage licenses.

Allen said he takes his responsibility as a man and the head of his household seriously.

“The responsibility as the head of the household lies squarely at the feet of men,” he said, adding that, biblically, men are given the responsibility to lead their families. “As men, our number one task is to be the spiritual caretakers of our wives and children. That is a heavy responsibility for men to bear.”

Allen said he does not know how the same-sex marriage issue will play out in the courts, but he believes it will take a spiritual awakening to win the battle.

Allen said his decision to not issue marriage licenses or perform marriage ceremonies anymore should not cause a hardship on Pike County residents.

“Pike County residents, who are seeking marriage licenses, can do so at any probate judge’s office in the state that offers that service,” he said.