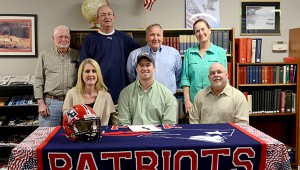 Tanner Rogers didn’t even begin playing organized football until he was in eighth grade.

For the senior at Pike Liberal Arts, one game was all it took to decide on his path in life.

On Wednesday morning, he took a step afforded to very few high school athletes when he signed his National Letter of Intent to play football for Belhaven University.

“When I first started playing football (in eighth grade), I just played a few games,” Rogers said. “I knew it was something I wanted to do to get to the next level. It’s definitely something I’ve always wanted to do.”

For Rogers, the prospect of playing college football started around his sophomore year of high school.

While attending Florala High School, Rogers first came in contact with recruiters when a teammate of his was being looked at by UAB.

After scouting his teammate, the recruiters began asking about Rogers.

“It was in between 10th and 11th grade when I first had interest,” Rogers said. “It was an awesome feeling. I really enjoyed it. UAB came and took a look at an offensive lineman and they started looking at me. I was kind of surprised after that.”

Wanting to get more interest from colleges, Rogers made the decision to play his senior year of football at Pike Liberal Arts, where serious offers started to come in.

By the end of the season, Rogers had scholarship offers from Reinhardt University, Kentucky Christian and Belhaven.

It was an easy decision, he said, especially given his desire to be a future head football coach. He would become a Belhaven Blazer.

“First of all it (Belhaven) has what I want to do academically,” Rogers said. “I want to be a head coach. It has the fourth largest coaching tree under Bobby Bowden and Nick Saban and some other coaches. If you want to coach, this is a great place to put on a resume. I talked to my parents and it was a no brainer.”

Rogers, who played tight end, defensive end and even some offensive line for the Patriots said he will more than likely play defensive end for the Blazers.

And one season from now, when Rogers is playing on Saturdays in Mississippi for Belhaven, he’ll always remember Friday nights under the lights in Troy.

“There is nothing like playing on a Friday night,” Rogers said. “You’re around all of your closest friends. It’s that small town feel and everybody knows you. Everybody comes out. Its that feeling of just complete family.”