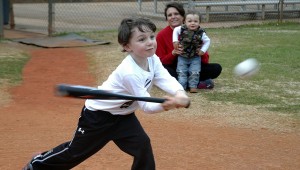 Ridge Hicks, age four, swings hard and sometimes he misses, but “that’s baseball.” His mom, Shannon Hicks and brother, Baylor, made up the cheering section at Monday’s practice.

Whether they’re skiing in the mountains of Western North Carolina, swimming in the salty surf of the Gulf Coast or swinging at round, white balls at Franklin Field, the Hicks family is right at home in the great outdoors.

“We’re outside anytime we can be,” Shannon Hicks said. “We love the outdoors and we love outdoor sports.”

Thomas and Shannon Hicks and their sons, Ridge, four, and Baylor, one, recently returned from a ski trip to Beech Mountain Resort in North Carolina.

“Ridge did really well. Better than I had expected,” his mom said. “No bunny hill for him. Thomas strapped him in a harness and they went down the slopes. Kids are fearless.”

The only “mogul” in the whole ski trip was a bump on the head Baylor got when he fell in the hotel lobby.

“Other than that, we had a great time,” Shannon said.

The Hicks family took advantage of President’s Day as an opportunity to get a jump-start on the baseball season.

“We’re all ready for baseball,” Shannon said. “Ridge enjoys playing, and we enjoy watching him and all the kids. Recreation baseball season is a lot of fun for a lot of us.”

Ridge’s birthday comes at the right time for him to “move up” this season.

Rather than playing tee ball with the four-year-olds, Ridge will play with the five- and six-year-olds in the Farm League, which is coach-pitch baseball.

“Ridge will be playing with older kids, so that’s why we’re out here getting in some batting practice,” Thomas said. “He’s excited. It’s going to be a lot of fun.”

Hicks tossed the ball to his young son and encouraged him to keep his eyes on the ball.

Ridge was a go-getter. He went after the balls that his dad didn’t quite get over the plate.

Those rare misses, Ridge chalked up to “bad pitches” and his dad agreed – most of the time.

“Baseball is good for kids,” Hicks said. “It gets them outside and away from iPads and television. This season, there will be 10 teams in the Farm League, five- and six-year olds. That’s 120 kids, and that’s great. They will be in the games instead of inside the house playing games.”

Hicks said the older the players are the more baseball teaches them about teamwork and about life.

“In Farm League, they get three strikes and three outs. They keep score so they learn about winning and losing. But most of all, they learn the game of baseball and have a lot of fun doing it.” 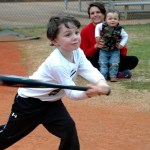 Ridge Hicks, age four, swings hard and sometimes he misses, but “that’s baseball.” His mom, Shannon Hicks and brother, Baylor, made up the cheering section at Monday’s practice. 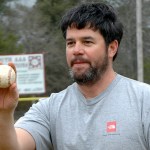 Thomas Hicks is the pitcher and the pitching coach for his son, Ridge. 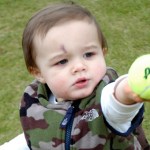 Below, Baylor Hicks kind of “balked” at being taken off the mound in a practice session.