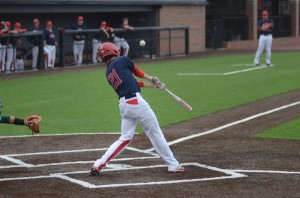 After a mostly defensive battle through five innings of baseball, Edgewood Academy broke the game open late in the contest, scoring three runs in the top of the seventh to clinch the game over the Patriots.

“We battled the whole game, and we did a lot better of a job today,” Pike Liberal Arts head coach Allen Ponder said. “We’ve just got to get better at competing late in the game. This is two games in a row now where the game has been close late and when it got into the later innings, we’ve given up a few runs and we’ve got to do better in that area.”

Drew Starling began the game on the mound for the Patriots strong, striking out Edgewood’s first batter of the game, David Clayton.

The Wildcats quickly created offense, though, when Jon Johnson tripled on the very at-bat.

One batter later, Johnson scored on a wild pitch from Starling to give Edgewood the early 1-0 lead.

A defensive battle ensued throughout the next five innings as each team exchanged mostly fruitless trips to the plate.

“We’re making strides in the right direction,” Ponder said of his team’s defensive play. “Obviously, I’d like to see us play better late in the game, but we are starting to execute better and we are seeing more positives than negatives now.”

The Patriots got their lone run of the game in the bottom of the sixth, when Tyler Hussey scored Rush Hixon on a bloop single to center field that forced Edgewood to bring pitcher JJ Kidd in to relieve Elliott.

The Patriots threatened the lead the very next at-bat when Kidd loaded the bases after hitting Pike Liberal Arts’ Tucker Johnson with an errant pitch.

But Starling grounded out on the next at-bat, leaving three players on base.

In the seventh inning, Edgewood’s offense exploded, scoring three runs to put the game out of reach after Johnson hit a two-run single to right field.

In the loss, Ponder said his team is showing improvement through two weeks of the season, which is comforting to see.

“It’s tough this part of the season, because you tell yourself you want to be good right now,” Ponder said. “But we still have a lot of time to improve. We’ve got a good group of guys and we’re going to continue to work and continue to get there.”