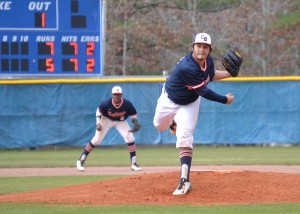 The Charles Henderson baseball team started its journey to three-straight state titles off on the right foot Monday afternoon, winning both games of its double-header, defeating Park Crossing 24-6 and Dothan 14-4.

Against Park Crossing, the Trojans scored in every inning, getting out to a quick 5-0 lead in the top of the third.

The Thunderbirds responded nicely, scoring two runs in the bottom of the inning to narrow the lead to 5-2, but Charles Henderson poured on the offense in the next few innings.

In the top of the sixth, the Trojans put Park Crossing away completely, scoring 17 runs.

Hunter Reeves and Nick Lewis each went yard once for Charles Henderson in the game. Lewis led the Trojans with four RBIs on four hits and Chase Hartley drove in four runs on one hit.

In the second game, Charles Henderson was equally as dominant, scoring in all five innings of the game.

The teams battled into the third inning, with each team matching one another by scoring two runs apiece.

But Charles Henderson’s late-game offense once again kicked in as the Trojans scored five runs in the bottom of the fourth to put the game out of reach at 13-4.

DeAndre Pitts hit the sole home run for the Trojans in the game, driving in two runs on the day.

Reilly Fox and Wilson each led Charles Henderson with three RBIs in the game.

Austin Ingram earned the win, striking out four and walking none in the game while allowing four runs in 5.6 innings pitched.

The Trojans are now 10-0 on opening day in the last five years and swept five-consecutive opening day double-headers.