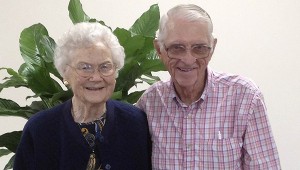 W.O. Sanders and his wife Irene have been married for 70 years and say they owe it all to walking in love every day.
MESSENGER PHOTO/JAINE TREADWELL

Ask the Rev. W.O. Sanders of Goshen what it’s like to be married to the same woman for 70 years and his reply will be that he couldn’t imagine not being married to his wife, Irene, for all those years.

The couple celebrated their 70th wedding anniversary in October and he said, in the beginning, they were an unlikely couple.

“Irene was from Little Rock, Arkansas and I lived on a dirt road farm in Pike County,” Sanders said. “The odds were probably one in a million of us meeting.”

But Sanders was called into the Army and he was stationed in Arkansas. Sanders’ sergeant told him there was a girl he needed to meet.

Luckily for Sanders, he was a soldier so the couple got married and, for more than a year, Uncle Sam kept them separated. But, when Sanders was discharged, the girl, who said she wouldn’t marry a farmer, came home to the farm in Goshen.

It was after Sanders retired from farming in 1980, that he answered the call to the ministry. And, there was Irene Sanders, the girl who said she would never marry a farmer or a preacher, married to a farmer and a preacher.

Sanders said unbelievable circumstance over the years brought him to the ministry.

In 1940, while working peanuts, his clothes got caught in the peanut picker and he could have easily lost a limb or his life. He had two other close calls with farm machinery. When he was in the Army during World War II, he was behind enemy lines for 23 days. Then, in 1961, Sanders had another near miss when the peanut picker he was working caught fire.

Later, when Sanders found himself in a declining financial situation, he called on the Lord and the Lord called him right back.

“It’s almost unbelievable the way the Lord works things out in our lives,” he said.

Irene Sanders had always supported and encouraged her husband and she continued to do so when he answered the call to the ministry.

“We were called mostly to country churches and I felt unworthy but blessed to lead those churches,” Sanders said. “Irene is probably more spiritual than I am. She has read the entire Bible 14 or 15 times. We pray together and try to set an example for others. We believe that we should set good examples for others to follow.”

A marriage of 70 years and counting is a good example for any couple to follow. And, in setting that example, Sanders said marriage is a give and take union.

“You have to learn to give and to take,” he said. “Irene and I have always tried to understand and respect each other. We never raise our voices to each other. We pray together and that is most important.”

Sanders said his wife is the heart of their family.

“We have two children, seven grandchildren and 13 great-grandchildren and Irene keeps us all together,” he said. “She is beautiful inside and out. What more could I say about her. Through all of these years, Irene and I have walked in love. For any couple, that’s the most important thing. To always walk in love every day.”