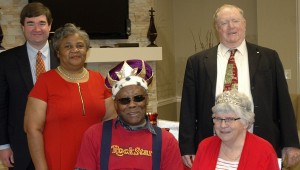 Troy Mayor Jason A. Reeves crowned the king and queen and offered them congratulations and best wishes on their yearlong reign.

Newly crowned King Frazier wasted no time in issuing a decree that will make chitterlings, turnip greens and cornbread the annual Valentine’s meal at the nutrition center.

Queen Henderson proclaimed health and happiness for all her “subjects” at the center. And, everyone applauded the decrees of their newly crowned Valentine’s King and Queen.

Until Friday, February 13, 2015, royalty has eluded Frazier and Henderson. Both, laughingly, said they never expected to be so highly honored.

“I’ve never been a king before,” Frazier said. “I don’t know how it feels right now, but ask me again in the morning.”

Most every little girl wants to grow up and be a queen. Henderson said she is happy to be a queen now that she’s all grown up.

King Lorenzo Frazier was born in Coffee County and grew up there. But, when he was 19 years old, he left the red clay fields of South Alabama for the Garden State, New Jersey.

“I went to New Jersey because I didn’t want to pick cotton,” Frazier said, laughing. “I got a job driving a truck and made a pretty good living. In 2001, I retired and came home because I was tired of dodging bullets.”

Frazier has five children who live in different states and that’s all right with him. He’s just proud to be back in South Alabama.

Henderson has lived in Troy all her life and she’s never had a desire to live anywhere else.

“I worked a Superior Molding for 32 years,” she said. “I worked a machine and I enjoyed what I did. But I enjoy being retired and I love coming to the nutrition center. We all get along so well and it’s just a joy to be here with so many wonderful friends.”

Henderson said she was surprised to be named Valentine’s Queen but so appreciative of the honor.

“I just never even thought that I might be a queen,” she said, with a smile.

Henderson has a son and a daughter and four grandsons and they are all blessings to her.

The staff of the Troy Nutrition Center treated all subjects of the Valentine’s court with a dinner “fit for a king.” And, as King Lorenzo decreed, the meal included turnips … but no chitterlings.