Ellis: ‘Going to do everything I can to make it count 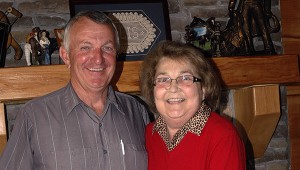 Lynn Ellis of the Springhill community is the recipient of a double lung transplant. On March 4, she will celebrate her one-year anniversary as a “transplant.” 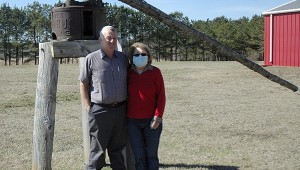 Ellis continues to protect herself from infections by wearing a mask when she’s around people.

The surgeon held up three fingers.

A year after Lynn Ellis’ double lung transplant, the surgeon’s words still bring tears to her eyes and to her husband’s.

“I still get goose bumps when I think about it,” Max Ellis said. “For Lynn to get the lungs that saved her life, three people had to die.”

On March 4, Lynn will celebrate one year of a “transplanted life” and she is determined that those three people did not die in vain.

“I owe them my life, and I’m going to do everything I can to make it count,” she said.

Lynn received the lungs of a 25-year-old male. Now, she can step out of her house into the sunshine and take a long, deep breath. For nine years, she couldn’t do that.

“An organ transplant’s not a life changing experience, it is life,” she said, with a smile.

Lynn is willing to share her story because, with every breath she takes, she is aware that someone died to give her that blessing.

“I also know that people die every day waiting for an organ transplant,” she said. “Organ donation is not something that we want to talk about, even think about, but I’m alive today because someone made the decision that gave me life.”

When Lynn was diagnosed with obliterative bronchitis, a rare and life-threatening form of non-reversible obstructive lung disease, she was told her condition would “come to a lung transplant.”

“I didn’t have a meltdown,” she said. “My concern was how to tell Max. How to tell my family. I wasn’t scared. I wasn’t afraid of dying. I just wanted to see my grandchildren grow up.”

Lynn said, knowing what she was facing, she turned her situation over to the Lord in prayer and He gave her peace.

“The Lord gave me peace and the confidence to face whatever was ahead,” she said. “He also gave me the desire and the commitment to do what I had to do to prepare myself to be ready if I got the opportunity for a lung transplant.”

The doctors told Lynn she had to keep her body in condition for transplant surgery. She went to pulmonary rehabilitation sessions in Dothan two to three times or more a week to improve her muscle tone. She used oxygen when she exercised and when she slept. She ate “right” and did everything possible to be ready when the call came.

“I was confident I was taking care of myself and that I was doing all I could to be ready,” she said.

But, in 2012, when Lynn was told, “it’s time,” she admitted she felt uneasy and, perhaps, a little anxious.

“Before I could be added to the lung transplant list, I had to be tested to make sure I was a good candidate for a double lung transplant,” she said. “On May 29, 2013, I was put on the list. Then, I had to wait for somebody to die. I can’t describe what it feels like to wait on someone to die.”

It was two months before the first call came.

“We had everything packed and ready because there’s only a small window of time to get to Birmingham and get prepared in case you’re a match,” Max said.

“I was more nervous than Lynn. I think it would have been easier if it had been me.”

Three people were called that day. Lynn was called in the event two lungs could be salvaged and were a match. If not, two others in need of single lung transplants are there and ready, one for the right lung and one for the left.

Lynn was not a candidate for the lungs. A lung went to a young woman with cystic fibrosis.

“I felt good because she needed the lung worse than I did,” Lynn said.

Other calls came, seven in all and two in five days, before a surgeon told Lynn Ellis, “You are my mission.”

“I didn’t have time to get nervous because so much had to be done to get me ready for surgery,” she said. “The surgery team kept things light, and I was at ease. I felt so blessed that I was going to get a chance at life, a chance to see my grandchildren grow up.”

Because of the urgency of getting to the hospital, there was no time to contact other family members. Max Ellis waited alone.

He did a lot of praying and a lot of thinking. He thought of the one who died so that Lynn could get the lungs she desperately needed.

He thought of the two who would die because they did not get the lungs. He thought of those he and Lynn knew who had received transplants and were doing well and those who had died.

He thought, too, of those who died waiting and hoping. He thought of the families of them all.

“When the doctor came and told me that all went well and Lynn was doing good, I knew how blessed we were,” he said.

The surgeons had opened Lynn’s chest up like the hood of a car, her husband said. She had 131 staples in her chest but she was blessed with the breath of life.

Lynn remembers waking up and the nurse telling her to take a breath.

“That was the first time in so long that I had been able to take a breath,” she said. “It was the most wonderful feeling. I felt like I was really alive again.”

Lynn spent 21 days in the hospital. Together, she and her husband spent the next two months in an apartment to be near the hospital in case there were problems.

She was blessed. She only had to go back into the hospital once to have fluid drawn from around her lungs. That problem was corrected and she was given permission to go home.

As Lynn Ellis nears that one-year anniversary of her double lung transplant, her wish is that people would better understand what it means to be an organ donor.

“Being an organ donor is not anything we want to talk about or think about,” she said.