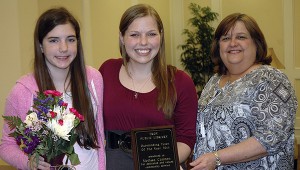 Melissa Cannon, center, a Troy University elementary education major, has been named the Troy Public Library’s 2014 Outstanding Tutor of the Year. The award was presented by Teresa Colvin, TPL children’s librarian on Friday. Also, pictured is Anna Fountain who congratulated Cannon on the award.

Troy University junior Melissa Cannon of Hartford has been named the Troy Public Library’s 2014 Outstanding Tutor of the Year.

In making the presentation at the library Friday afternoon, Teresa Colvin, children’s librarian, said, if she had to choose one word to describe Cannon, it would be “outstanding.”

Cannon began with the TPL’s tutoring program in 2013 and is currently tutoring two students at the same time.

“Melissa is an elementary education major at Troy University,” Colvin said. “She has donated more than 100 hours to the library’s tutoring program. She has exceeded expectations in assisting others in the process of learning.

“One of her students has improved to the point of being moved out of the intervention class. That speaks highly of Melissa as a future teacher. She will be a fantastic teacher and an outstanding future hire for any school system.”

Cannon began tutoring at the library as a class requirement.

The class requirement was 10 hours but, when the semester was over, Cannon said she loved tutoring and decided to continue working with her student, Anna Fountain.

A teacher recognized Cannon’s ability to relate to young people and observed the way they responded to her and encouraged her to consider a career in teaching.

“I have a passion for kids and love to work with them,” Cannon said. “Teaching is what I want to do.”

“Somewhere in Geneva County or maybe in Goshen,” she said. “I love the atmosphere of a small school. Hartford is in Geneva County and I’m familiar with Goshen Elementary School so I would like to teach at either place.”

Cannon has no desire to teach in a large elementary school but she does enjoy exploring the big, wide world.

“I love to travel and I’ve been on several mission trips — to Honduras, Romania, Germany and Austria,” she said. “On those trips, I’ve had opportunities to work with the children in sports camps and Vacation Bible School. I’ve learned a lot on the mission trips. ”

Cannon said she was honored to receive the TPL’s Outstanding Tutor of the Year Award and looks forward to continuing to be a part of the tutoring program.