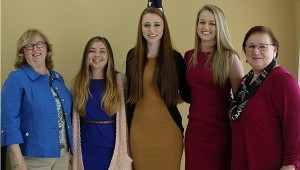 “All of the nominees possess those qualities and all are deserving of the DAR Good Citizens Award,” Dorrill said.

The Good Citizen nominees were asked to write an essay related to the nation’s heritage.

“All of the essays were wonderful,” Dorrill said. “We thank them all for participating and for the lives they are leading.

Gilmore had the honor of reading her essay to the Chapter members and guests.

She said that, as a young country, America has experienced many trying times. But, America, like all good citizens, has the qualities necessary to carry it through trying times.

Gilmore said America has a strong heritage of outstanding leadership of love and devotion and a commitment to preserve the country’s heritage.

“I am proud of our past and look forward to the future,” Gilmore said.

Dr. Jean Laliberte, vice regent, presented certificates of award to the recipients and expressed congratulations and best wishes to them as they move forward in their educational endeavors and career opportunities.

All of the Good Citizen nominees have outstanding academic records and are also involved in extracurricular activities.

Gilmore is a class representative, a varsity cheerleader, Excel Club member, Drama Club member and a member of the Christian Students organization. Her parents are George and Chris Gilmore.

Post is a member of the CHHS band, the Math Club, Student Government Association and the Key Club. She plans to attend Troy University. Her parents are David and Bindi Post.

Sewell is a member of volleyball and softball teams at PCHS. She is a varsity cheerleader, a member of the SGA and the Art Club. She is also a Bulldog Ambassador. She plans to attend Troy University. Her mom is Lynn Cole.

Warrick is the daughter of Jeffrey and Amy Warrick.

Since its founding in 1890, the Daughters of the American Revolution has promoted historic preservation, education and patriotism in communities across the nation. From essay contests to educational materials to youth programs, scholarships, and awards, DAR has something to offer to every community.