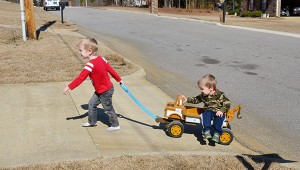 Trevor Mixon pulls his brother, Evan, in a wagon outside of their home on Feb. 7.
MESSENGER PHOTO/COURTNEY PATTERSON

Saturday, Feb. 7 brought sunshine and playtime to the city of Troy, and the Mixon family took full advantage of it.

“As long as it’s not cold and raining, we’re outside all the time,” said Melinda Mixon. “I don’t like the cold, but the kids don’t mind it too much.”

Melinda and Phillip Mixon have lived in Troy for seven years. They moved to Troy when Phillip accepted at job teaching economics at Troy University.

Their sons, Trevor, 4, and Evan, 2, enjoyed the time in the warm weather to play with each other and their friend that lives next door.

Melinda and Phillip had some activities of their own.

“We’re letting them outside to burn some energy and get some sun,” Melinda said. “We’re putting together a cabinet and trying to get the garage organized.”

The cold has prevented Melinda and Phillip from accomplishing simple tasks they had been planning to do, but they worked on completing all of them on Saturday.

The Mixons built a cabinet, organized their garage and cleaned out their cars.

“It’s a nice day outside,” Melinda said. “They can play close by while we get some work done. The first few warm days, everyone is out trying to get stuff done.”

And play, they did. Trevor and Evan were non-stop as they played outside.

They rode bikes, pulled each other in the wagon, played with toys, played on their swing set and played fetch with their German Shepherd, Melinda said.

It is typical for the boys to play with kids that live on the same street.

“We like this street,” Melinda said. “It’s quiet.” Melinda said that she enjoys letting her kids play, knowing they can be safe while having a good time.

Not much traffic goes through the street, so there is not much to worry about. The view of the pond is an extra perk of their home.