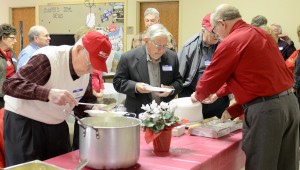 Surviving a heart condition isn’t the defining moment of a life. It’s the way a person lives afterwards that matters.

“You need to be ready to die all of the time,” said Nick D’Andrea, the guest speaker at Saturday’s Red Cap Survival Breakfast, sponsored by the Pike County Heart Associations.

“Your life is on borrowed time,” he said.

D’Andrea told his survival story to the survivors and families gathered at the breakfast.

“I was losing 32 percent of my blood with each pump,” he said.

In 2011, he began to have pains in his left knee. Because he was a runner, the knee pains did not alarm him.

After several doctor visits, he was diagnosed with a massive staph infection.

Three months after the infection was removed, D’Andrea was told that he had a problem with his aorta. The doctor told him he had what is called a “widow-maker.”

On Aug. 30, 2012, D’Andrea went in for surgery to discover that hole was caused by the staph infection.

“You can be as healthy as can, but you just never know,” D’Andrea said, stating that there is nothing genetic about his experience and there is no family history of heart disease.

“It has been an adventure in confidence,” he said.

D’Andrea was one of several survivors recognized during the breakfast, which has been held for at least 20 years.

William White was recognized for being the one in the room to survive heart disease the longest. He has survived it 32 years and has had four bypasses.

“It lets us recognize those people who are survivors,” said William Davis, a board member of the Pike County Heart Association.

“It gives us an opportunity to meet new people who have had a heart condition or stroke,” Davis said.

The Pike County Heart Association is in the midst of its annual fund-raising campaign, which culminates with the Heart Walk at 5:30 p.m. Tuesday.