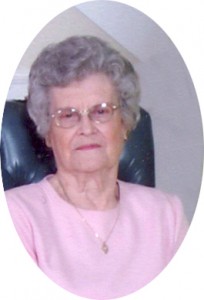 Mrs. Hayes worked for a number of years for the Selective Service Board. She was the wife of a minister, and she fully accepted this calling. She held various jobs in the churches they served. These jobs were always enjoyable to her. Mrs. Hayes was a homemaker; she welcomed people into her home. She loved the family to gather there and be together. Her winsome smile will be missed by all who knew her. Although she had been bed ridden for several years, she was non complaining, always thanking all who helped her.